In the previous post in this series, we explored the CreateArgument() method, and showed how this method is responsible for defining how model-binding works in minimal APIs, by choosing which source to bind from and generating an Expression for the binding.

We skipped over the Expression generation in the previous post, so we're going to dive into it in this post and look at the (effective) code that CreateArgument() generates.

This is a pretty long post, so a table of contents seems in order:

We'll look at half of the binding expressions in CreateArgument in this post, and half in the next post.

A quick recap of RequestDelegateFactory.CreateArgument()

In this series we've looked at some of the important classes and methods involved in building the metadata about an endpoint, and ultimately building the RequestDelegate that ASP.NET Core can execute:

So far we've been focusing on the InferMetadata() function, and in this post we're looking closer at a method it calls: CreateArgument(). CreateArgument() creates an Expression that can create a handler parameter, given you have access to an HttpContext httpContext variable.

For example, lets imagine you have a handler that looks something like this:

To execute the handler, ASP.NET Core ultimately needs to generate an expression that looks a bit like the following: I've highlighted the code that CreateArgument() generates using 👈:

Much of this code (though not all) is generated by CreateArgument() as an Expression tree. Specifically, it generates the code that creates handler arguments based on an ambient httpContext variable, and checks that the values are valid (not null).

In this post, we're going to look at the various forms this generated code can take, depending on the source of the binding (e.g. the querystring, the request body) as well as the type of parameter being bound, and its nullability.

A fundamental concept used by the RequestDelegateFactory is Expression trees, and compiling them into an executable delegate.

This will all become more obvious as we look at some examples, but I wanted to highlight these to point out that nullability is a big part of the generated Expression trees, and contributes to whether the parameter is valid or not.

As you saw in the previous post, CreateArgument() first checks for any [From*] attributes applied to parameters to determine the binding source, but I'm going to skip over this section for now to look at binding parameters to well-known types.

As I described in the last post, you can inject types such as HttpContext and CancellationToken, and these are bound automatically to properties of the HttpContext injected into the final RequestDelegate. As these properties are directly available, they are the simplest Expressions to generate (which is why we're starting with them)!

CreateArgument() contains a whole load of static readonly cached expressions representing these well known types. As an example, we'll look at how these Expressions are defined, and what the generated code for the argument looks like:

Here we have two types of expression. The first is a ParameterExpression, so it defines the Type and name of a parameter passed into a method. The second is a MemberExpression that describes accessing a property. As the HttpContextExpr is passed into the Expression.Property call, this is equivalent to code that simply looks like this:

Doesn't look like a lot does it!? 😄 But this is all CreateArgument() needs to generate for built-in types; this expression defines exactly how to create the argument that is passed to a handler with an HttpRequest parameter. The same applies to most of the other simple "well-known" types. For example, consider this handler that only uses built in types:

CreateArgument() generates a single simple expression for each argument; no extra validation or local variable expressions are needed. The final RequestDelegate for this handler will look something like the following (where handler refers to the lambda method in the minimal API):

Of course, not everything can be as simple as this. Now we've covered the simple cases, lets look at something more complicated: generating expressions for binding to route values, the querystring, and headers.

Generating expressions for binding to route values, the querystring, and headers

Before we start, the good news is that binding to each of these resources have a lot of similarities:

Because of these similarities, the Expression generating code in CreateArgument() is much the same for each. For that reason we'll stick to looking at the code generated for just one of these, the querystring. In addition, we won't look at the actual code building up the Expression trees, as frankly, it's far too confusing.

Instead, we'll take a different approach: I'll show an example handler, and we'll look at the effective code generated for it. We'll then tweak it slightly (make it nullable or change the type of the parameter, for example) and see how the code changes. This will let us explore all the different expressions without getting bogged down in trying to follow the logic (but you're obviously welcome to read the source if you prefer)!

Binding an optional string parameter to a query value

We'll start with a simple handler that optionally binds to a query string value:

If you follow the flow chart from my previous post, you'll see that CreateArgument() will choose to bind this argument to a querystring value (rather than a route value, as there aren't any). As the parameter is optional (so doesn't need checking for null) and is a string (so doesn't require conversion), the resulting RequestDelegate looks something like this:

There's a bit of duplication in the generated expression here, which simplifies handling some other scenarios, but otherwise there's not a lot to discuss here, so lets move on.

Binding an optional string parameter with a default value

For the next scenario we'll update the handler's parameter to no longer be nullable, and instead we'll give it a default value. Lambdas don't support default values in parameters, so we'll convert to a local function for this example, but this has no other impact on the expression generated

So how does this affect the generated code? well, as you can see below, it's very similar! Instead of falling back to null, we fall back to the provided default value, as you might expect:

Ok, that covers the optional case, lets move on to when the parameter is required.

We'll go back to the original handler now, but convert it to a string parameter instead of string?:

With the parameter now required, we have to make sure we check that it's actually provided, and if not, log the error. CreateArgument() generates three expressions to handle this, each of which is shown below.

First, we define a local variable expression which has the type of the parameter (string) and is named based on the parameter:

Next, we have the binding expression, which reads the value from the querystring, checks it for null, and both sets a variable wasParamCheckFailure and logs the error if required:

The final expression is what's passed to the handler function, which in this example is just q_local

Putting it all together, and combining with the extra details added by RequestDelegateFactory.Create() gives a RequestDelegate that looks roughly like this:

Things are definitely getting a bit more complex now! Lets add another layer of complexity in and look at binding to something other than a string, where we need to call TryParse to create the value.

Binding an optional int parameter to a query value

Let's go back to our original simple handler, but this time optionally bind an int to a query string value:

Simply changing from a string? to an int? has a big knock-on effect on the generated code as it now needs to account for:

If you put it all together, and combine with the extra logic that RequestDelegateFactory.Create() adds, you end up with a RequestDelegate that looks something like this:

Lets look at how adding a default value changes the generated code.

Binding an optional int parameter with a default value

Just as we did with string, we'll switch to using a non-nullable parameter with a default value, using a local function:

The generated RequestDelegate in this case is very similar to the previous example. There are three main differences:

For completeness, let's look at the final equivalent case for our parameter, where the value is required.

In our final handler example we have a required int parameter:

The generated code for this case is similar to the previous version where we had a default value, with two changes:

With that we've now covered the generated expressions for:

This is obviously only a small number of the possible parameter types that you can bind to, but this post is already too long, so we'll leave it there for now. In the next post we'll carry on where we left off, and look at binding to the remaining parameter types.

In this post I showed examples of the expression trees generated for specific parameter types. I started by showing how well-known types like HttpRequest and CancellationToken generate expressions that bind arguments to properties of HttpContext. These are the simplest cases, as they don't require any validation.

Next we looked at binding string parameters to the querystring, route values, and header values. The expressions for optional parameters (string?) and parameters with default values were relatively simple, but for required values (string) we saw that some validation was required.

Much more validation is required when using parameter types that must be parsed from a string, such as int values. Whether you're using optional or required values, these require some degree of validation, which results in a lot more generated code in the expression. In the next post we'll continue looking at the expressions generated in CreateArgument() for other parameter types. 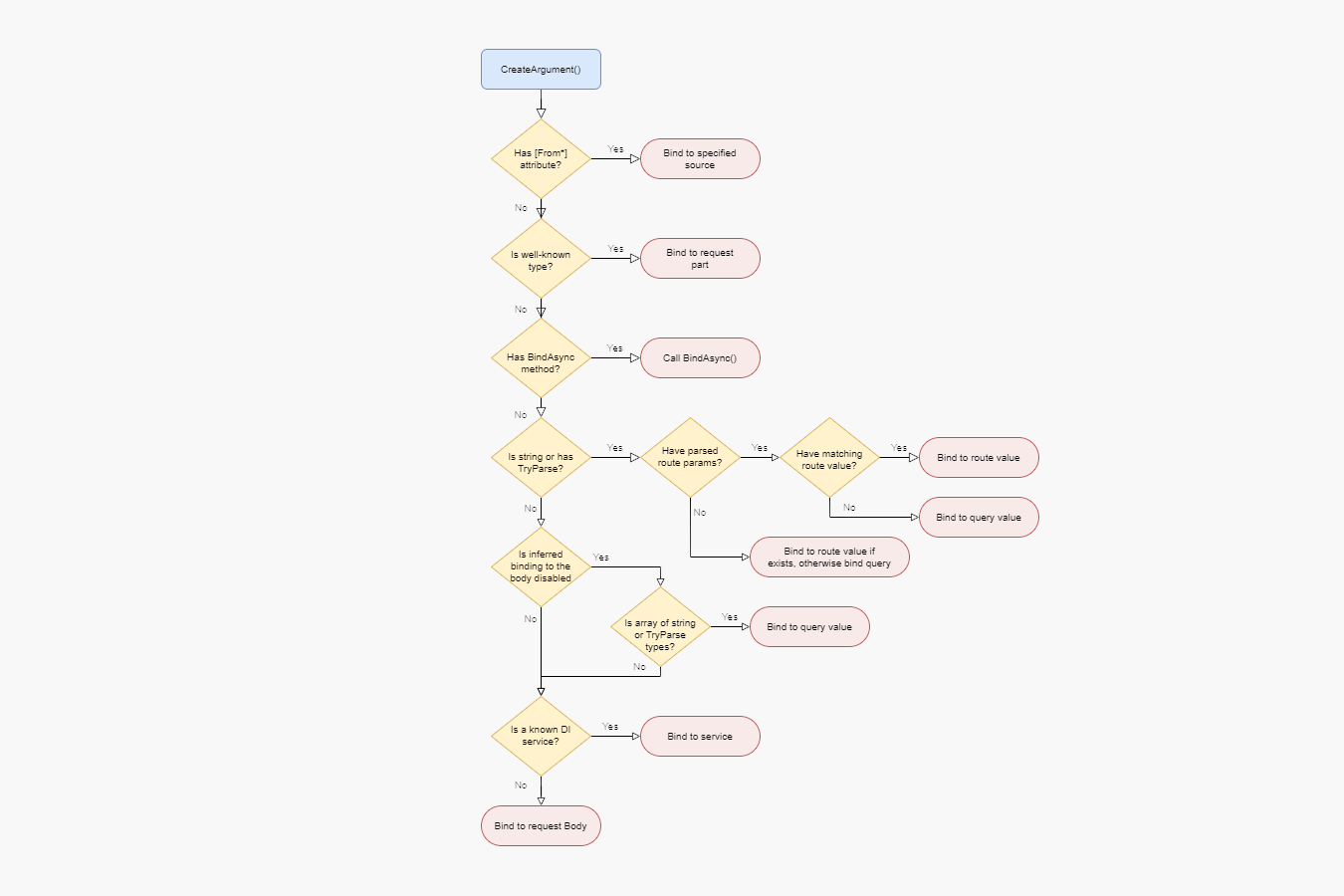