This is my post for the C# Advent Calendar. Be sure to check it out in the run up to Christmas for a new post every day!

Why create a Roslyn Analyzer?

I was recently investigating some strange bugs which would only sporadically manifest in an ASP.NET app recently. Long story short, eventually the issue was traced back to a Task not being awaited. This was causing concurrency issues that were hard to spot in the code, as everything compiled correctly. For example

By default, you will get compiler warnings if you don't use await inside an async method. The problem was, we were using await for some of the calls in the offending method, just not all of them. By awaiting a single Task, the compiler was satisfied, and no warning was issued for the second method.

As an aside, this is one of the main arguments for preferring the Async suffix for async methods. Even with a rich IDE like Visual Studio, the issue in the above code was not picked up - when reviewing code statically (e.g. on this blog or in GitHub), the Async suffix is the only indication that there's anything awry in the second call.

Once we identified the problem, the question was how to prevent it happening again. Naming conventions and code-reviews can go some way towards mitigating the issue, but it seemed like there should be a more robust technical solution for detecting un-awaited tasks. That solution was a Roslyn Analyzer.

In this post I'll introduce analyzers in general, and show how to get started. In a later post, I'll show the solution we came up with for the above problem.

What are Roslyn analyzers

Analyzers are effectively extensions to the C# Roslyn compiler, which let you add extra warnings and errors to your code, in addition to the standard compiler errors. You can use these to enforce naming styles and code conventions, or to flag particular code patterns, such as the missing await in the above code.

In Visual Studio, analyzers installed as extensions or as NuGet packages hook into the UI. You'll see green/yellow/red squigglies depending on the severity associated with your analyzer, and you can even associate your analyzer with a Code Fix to perform automatic refactorings:

If you're using an editor other than Visual Studio, you won't get these UI enhancements, but by referencing the NuGet package you'll still get the compiler warnings and errors when you build your project.

If you're writing cross-platform code (or even if you're not) I strongly suggest installing the API Analyzer. This will highlight framework API calls that are deprecated, or which might throw PlatformNotSupportedExceptions on certain platforms.

Up until recently, creating a Roslyn Analyzer that could be consumed anywhere was a bit of a chore. You had to install various extensions from the Visual Studio marketplace, and even then the project templates produced PCL projects, which requires a different build chain to normal .NET Standard projects. When I created my first analyzer, half the battle was converting the project to be compatible with .NET Standard.

I was therefore very happy when writing up this post to see that the Analyzer projects in Visual Studio 2017 are now .NET Standard by default! I think that happened in update 15.5, but I'm not 100%. Either way, it makes the experience much smoother, so I'm going to assume you're already on Visual Studio 2017 15.5 for this post.

The first step is to install the necessary components for building Analyzers and VISX extensions in Visual Studio. You don't have to install the VSIX components, but even if you're always going to distribute your analyzer as a NuGet package, it makes the debugging experience much smoother, as you'll see later.

Open the Visual Studio Installer program from your start menu, and click the Modify button next to your installed version of Visual Studio: 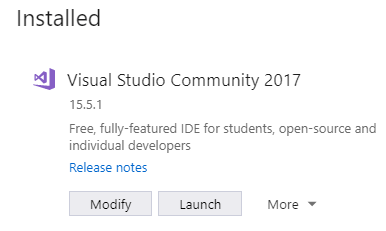 From the Workloads page, scroll to the bottom and select the Visual Studio extension development workload. This installs the .NET Compiler Platform SDK, the Visual Studio SDK, and other prerequisites. Depending on which other workloads you have installed it should use an additional 150-300MB of drive space. 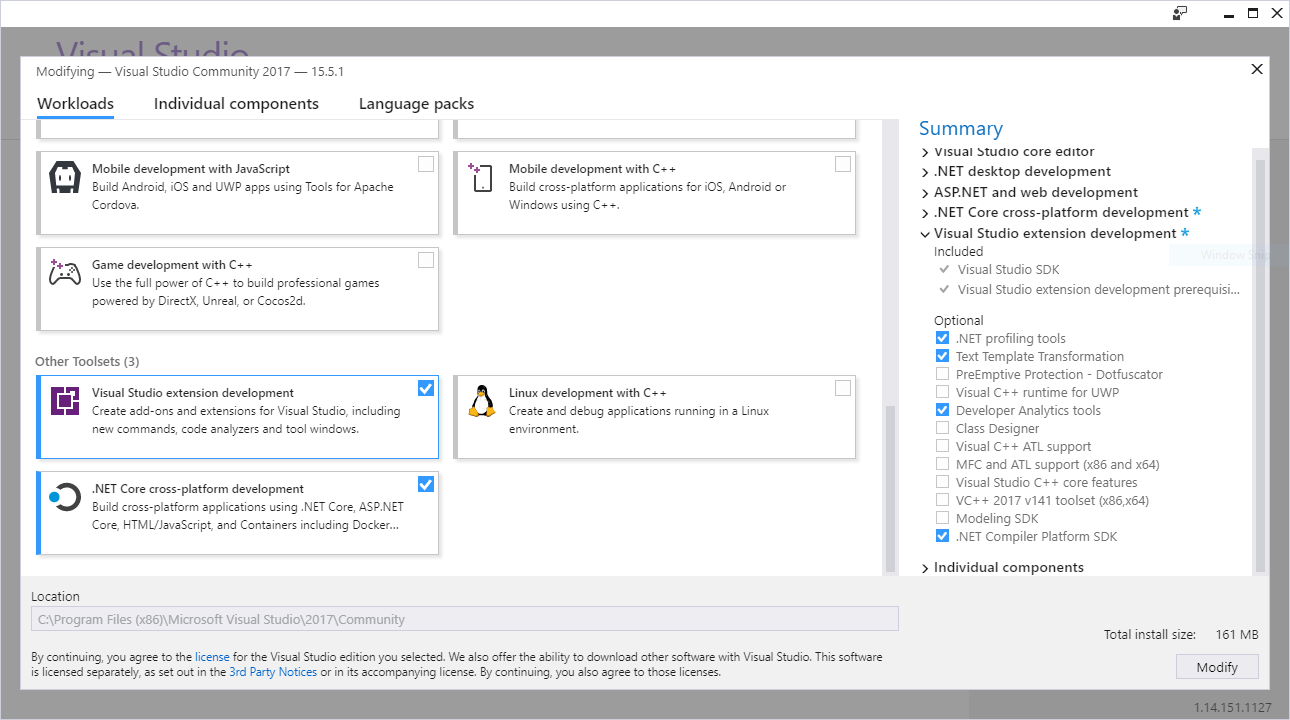 2. Create an Analyzer with Code Fix

There are a variety of new templates made available by installing the Visual Studio workload, but the one we're interested in here is the Analyzer with Code Fix (.NET Standard). You can find it under Visual C# > Extensibility: 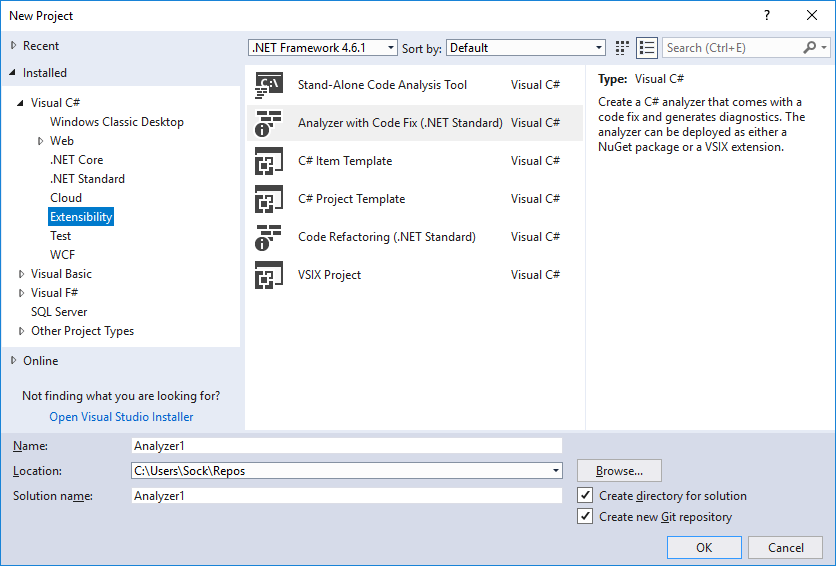 Give your project a name (the imaginative Analyzer1 in my case), and let Visual Studio do it's thing. Once the template is created (much faster than usual in update 15.5 I have to admit) you'll have a solution with three projects:

The default project template creates a basic, but complete, Analyzer and CodeFix which requires that all class names should be entirely uppercase (I said it's complete, not useful). The Code Fix lets you click the light bulb (or ctrl+.) when the analyzer detects a class with lowercase letters, and replace the type with its uppercase equivalent.

At this point, rather than digging into the analyzer code itself, I'm going to show Visual Studio's party trick - debugging an analyzer while it's running in another instance of Visual Studio!

Debugging your analyzer inside Visual Studio

If you're new to working with the Roslyn compiler directly, then the code in an analyzer can be daunting. Lots of types with somewhat obscure names can make it difficult to get a foothold. For me, one of the best ways to get to grip with it was the ability to Debug my code as it was running in another instance of Visual Studio. That sounds like it would be a pain to set up, but it actually works out-of-the box, just press F5!

Make sure that the VSIX project is your solution's current startup project (it's shown in bold in Solution Explorer and it's listed in the Startup Projects box next to the Debug button):

I haven't looked into the specifics, but when you debug a VSIX project in this way, I believe it uses a different profile to your normal Visual Studio profile. When you first Debug, you'll see the Visual Studio startup screen asking to setup your environment: 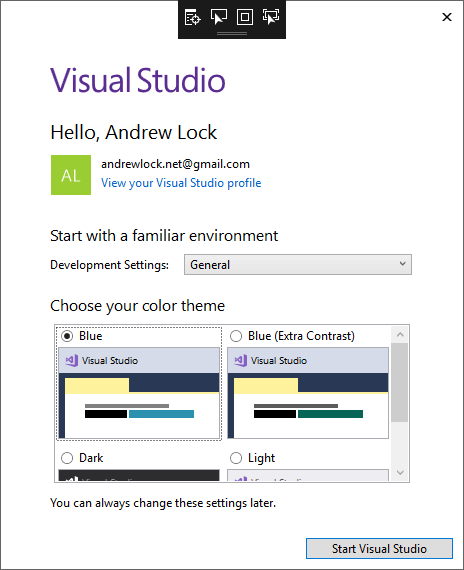 Note the small black debugging bar at the top of the window - this is an easy way to tell whether you're looking at your main Visual Studio window or the debugging window! As this is a separate Visual Studio profile, your recent projects list will be empty: 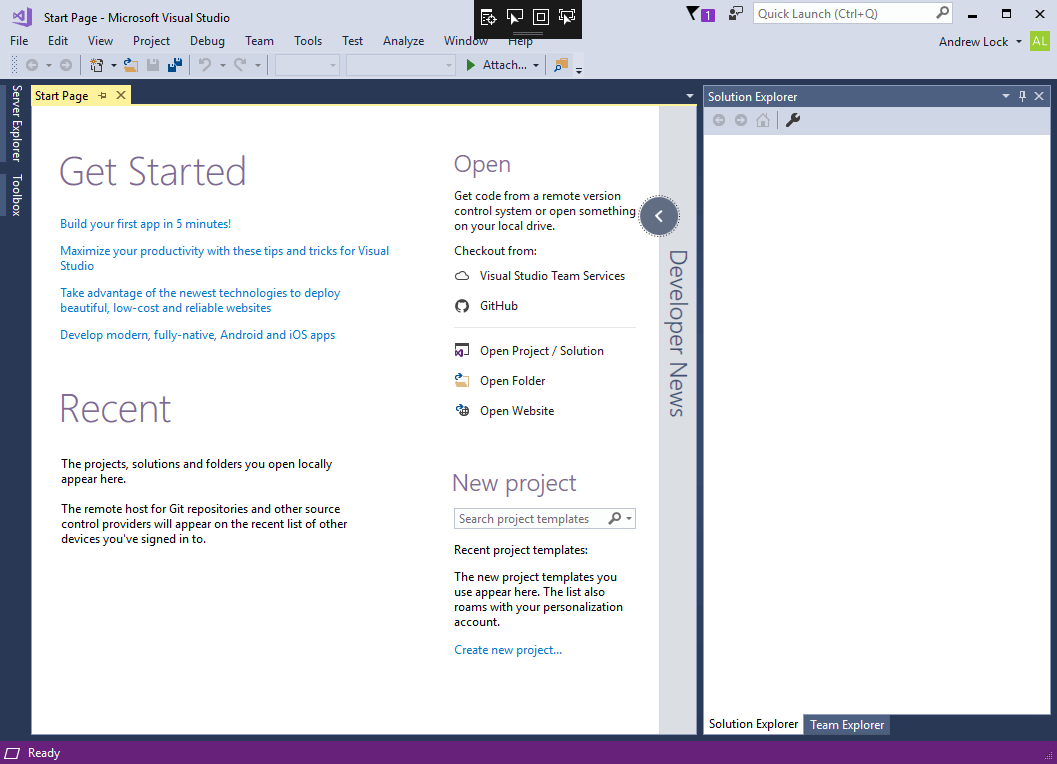 If you check in Tools > Extensions and Updates you may also find that some of your extensions are missing. However, importantly you'll see that our analyzer, Analyzer1, has been installed: 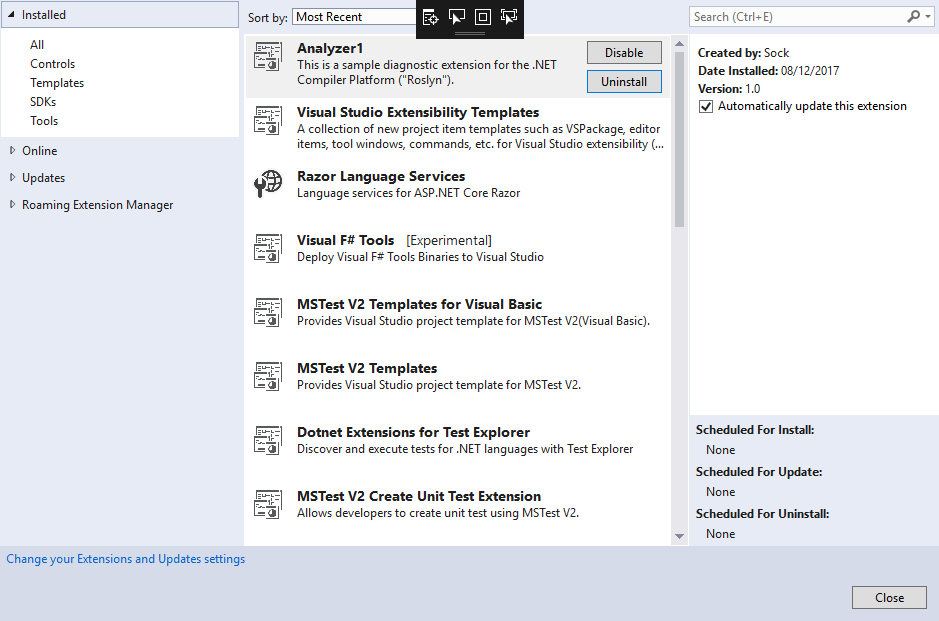 Don't worry, all of these changes are only in the Debug session of Visual Studio - your existing Visual Studio instance and settings won't be affected. Any changes you make to the Debug instance are persisted across sessions though.

This is all very nice, and lets you test your analyzer in action, but you can also properly debug the analyzer code. If you set a breakpoint in your analyzer project, you can step through the code as it's executed in the other instance of Visual Studio. Pretty cool :)

This approach is great for experimenting and exploring issues, but you can also unit test your analyzers, as shown in the Analyzer1.Test project.

Testing your Analyzer and CodeFix

Roslyn is effectively a "compiler as a service". You can pass it a string containing C# code, and it will compile it, allowing you to ask semantic questions about the contents, including running your analyzer.

Creating a unit test for the sample project is simple, thanks to some helper classes added to the project by default, in particular the CodeFixVerifier base class. Simply create a string containing the C# code to test, define the expected analyzer results, and call VerifyCSharpDiagnostic() as shown below.

This compiles the provided string, and runs your analyzer against the compilation result. As you can see, this test verifies that our analyzer flags the class TypeName as containing lowercase letters, and defines the position in the string (which is given the placeholder name "Test0.cs") that the warning should be placed.

In this post I showed how to install the necessary components to build Roslyn analyzers, why you might want to, and how you can Debug and test your analyzers, using the default project templates. In the next post, I'l take a look at the code in the default analyzer template, and look at building the await analyzer described at the beginning of this post. 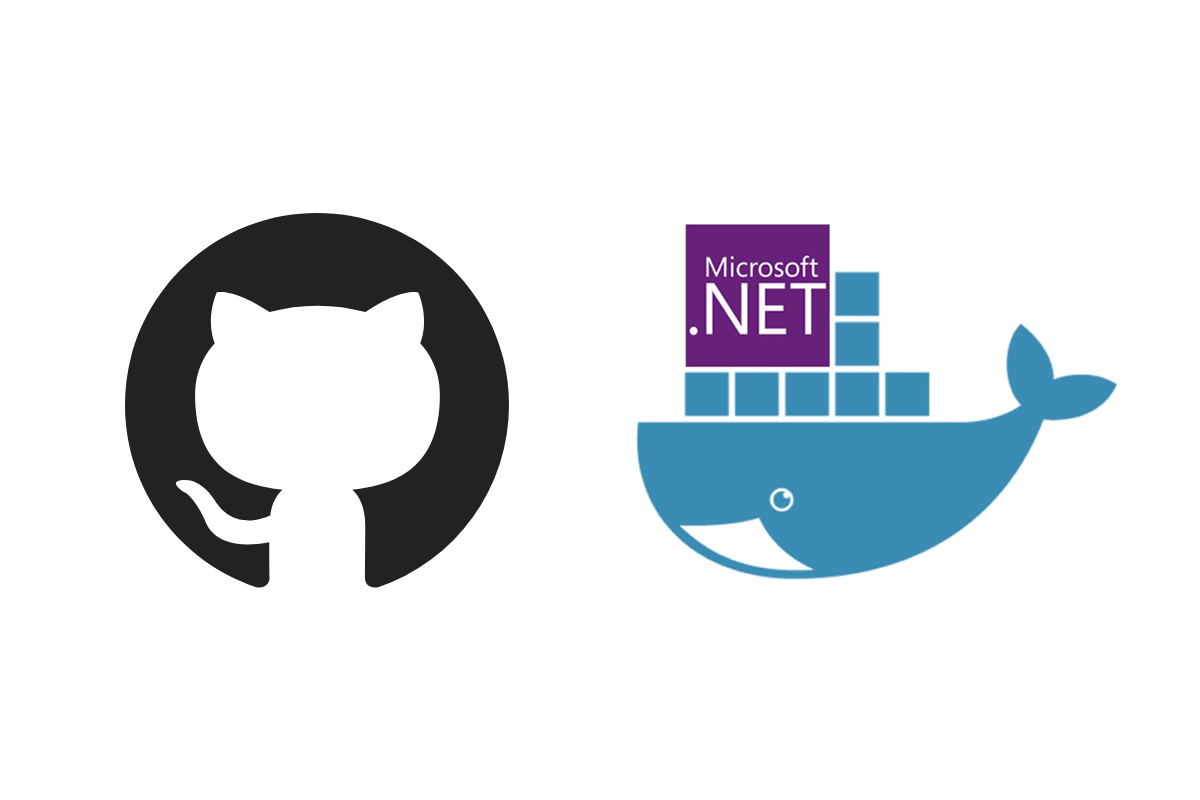 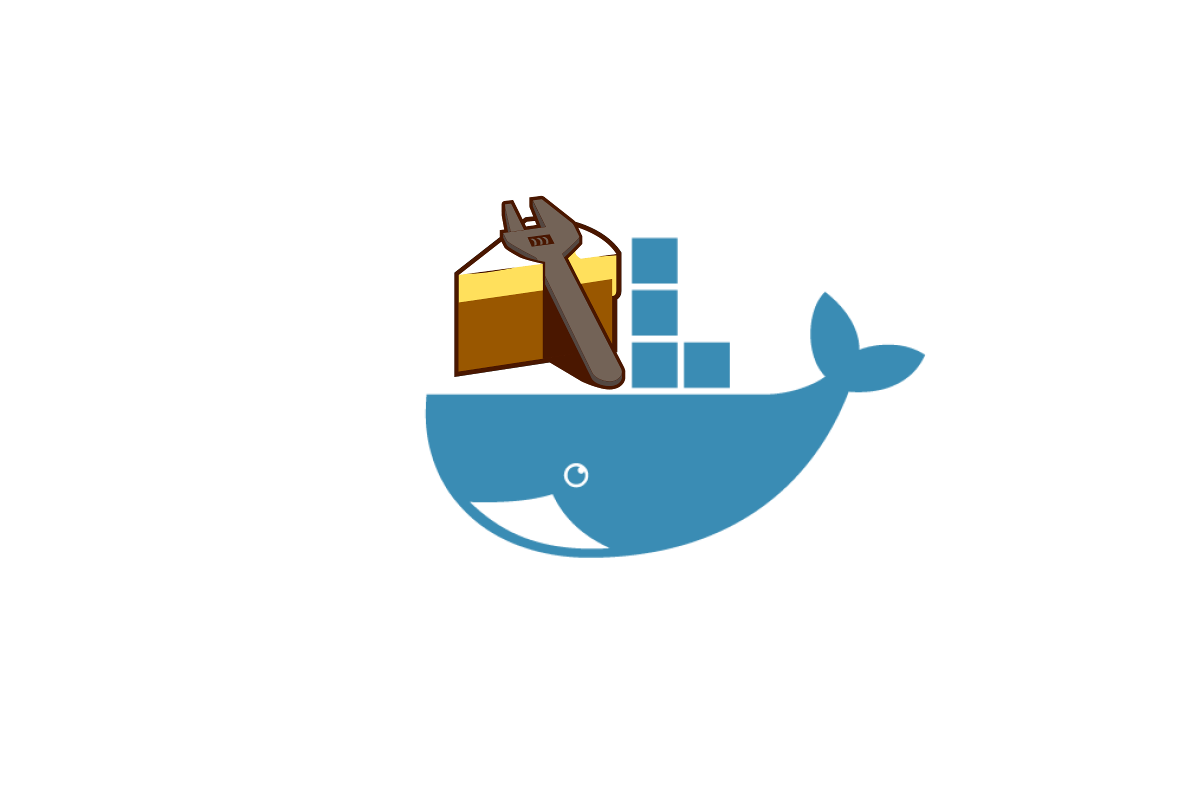