In this post I show how to use the Azure DevOps REST API to view the results of builds in Azure DevOps Pipelines for a given branch/tag, and how to download the artifacts. The hardest part of the process for me was figuring out which NuGet packages to use. Once I managed that, the API was pretty pleasant to work with!

Background: automate all the things

I've been working a lot on updating the build and CI process for Datadog's .NET APM tracer recently. As part of that, I wanted to improve our laborious release process. Prior to my changes, this required:

We've been improving and automating various parts of this process, but in this post I'm going to describe how I achieved step 3, highlighted above - downloading specific artifacts from an Azure DevOps pipeline.

Thanks to previous work, we now do all of the build for the tracer in a single, multi-stage, pipeline. As a final step, we collect all of the artifacts from previous stages and publish them as a single build artifact. Even before we auto-downloaded it, this made the process of finding and downloading the correct artifacts easier. 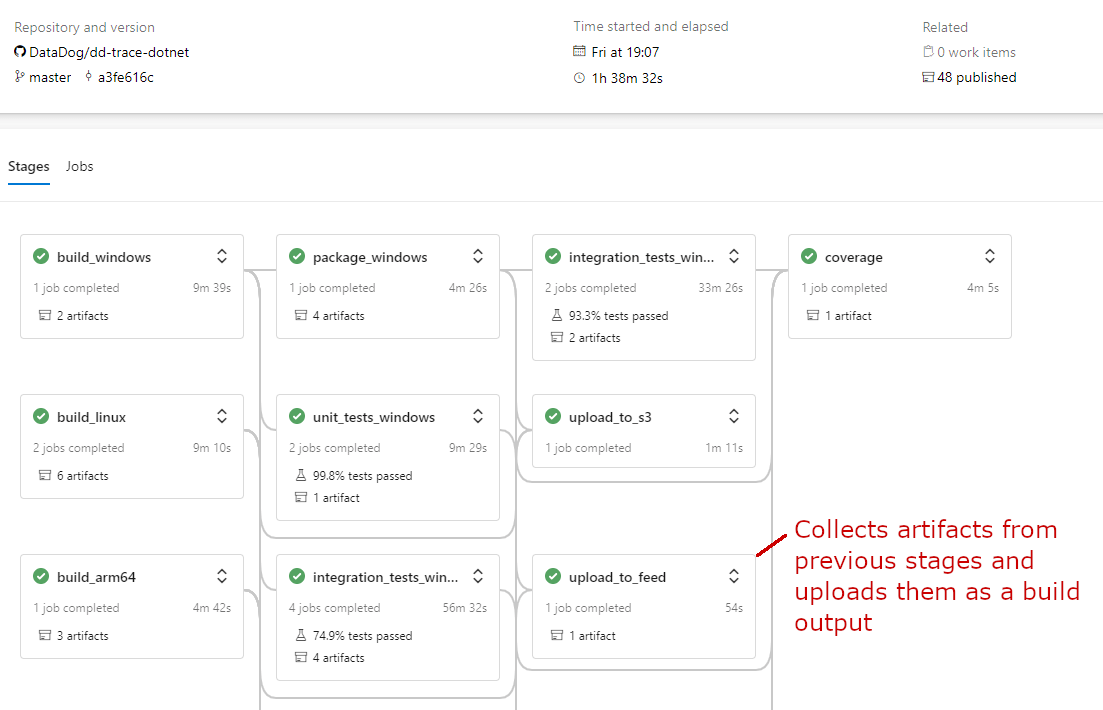 Interacting with Azure DevOps… so many NuGet packages to choose from

Azure DevOps is obviously a Microsoft product, so I assumed there would be a NuGet package for interacting with your builds from .NET. In fact there are many NuGet packages. And that's where I had some difficulties.

You'd have thought that an article in the Azure DevOps section of the documentation titled ".NET client libraries" would clear things up, but it only served to confuse me further with diagrams like this one:

That document lists sixteen different NuGet packages. Some of them are Microsoft.VisualStudio.* packages, some of them are Microsoft.TeamFoundationServer.* packages. None of them contain the words "Azure" or "DevOps". On top of that, it has a version table that describes how different versions of the NuGet packages map onto different versions of TFS and Azure DevOps Server but none of the versions mention Azure DevOps Services, which is the actual SaaS platform that I (and surely most people) are using?

The package I needed for calling Azure DevOps from an automated workflow was Microsoft.TeamFoundationServer.Client. In the next section I show how to use it.

Give the token a descriptive name (e.g. Github CI Token), set the expiration, and choose the scopes the token is authorized to use. The scopes are effectively the "permissions" the token will have. All we need at this stage is the ability to read Azure pipeline build results, so check Build:Read and leave it at that. 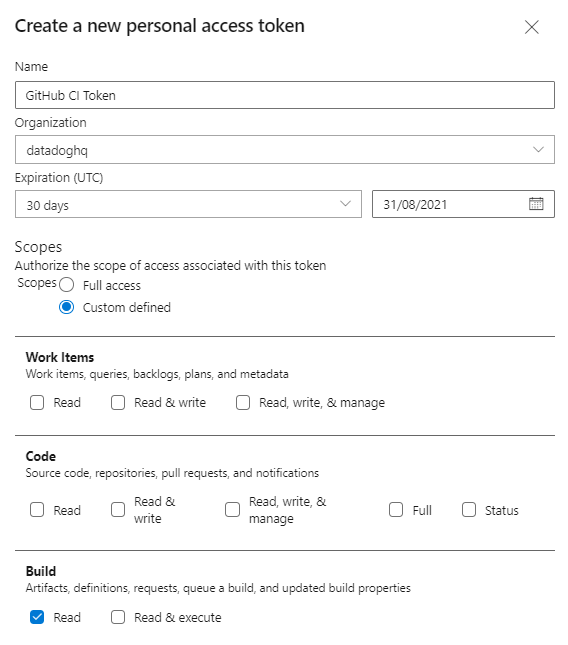 After creating the token, you're shown the value. It's important you copy this value, as you can't get it back later!

Now you have a token, you need to expose it to your GitHub action. I'm only focusing on the .NET side of interacting with Azure DevOps in this article, so I won't go into here, but this article describes how to store a secret in GitHub and access it in a GitHub Action.

We now have the prerequisites we need: we've installed the Microsoft.TeamFoundationServer.Client NuGet package, and our .NET code has access to an Azure DevOps token. It's time to write some code.

As a reminder, I needed to download the build artifacts from the Azure pipeline run that was triggered when a git tag is pushed to the repository. That means we need to take the following steps

To interact with Azure pipelines, we first need to authenticate. This is easy enough using the NuGet package and token we've already added:

It's a slightly strange API, but you can create an VssConnection using the token by setting the userName parameter to an empty string, and the token as the password.

With the connection created, we can now make calls to Azure DevOps to retrieve the builds associated with out tag.

Finding the builds associated with a given tag/branch

For the next step, we need to grab a few constants. First, we need the tag name that we're going to find the builds for. In the example below I'm using a tag called v1.28.2, which corresponds to the git "branch" refs/tags/v1.28.2 when it's triggered in Azure DevOps. In practice, you may want to provide the tag name as an argument to your script, or otherwise use Git operations to find the latest tag.

Additionally, you'll need some details about the Azure DevOps project and pipeline. First you'll need the GUID for your Azure DevOps project. Unfortunately, this is hard to find, as it's not obviously exposed in the UI. I found it by navigating to the Azure organisation page (which lists all the projects), hitting F12 to open browser tools, and noting the value of the id attribute. Hacky I know

The third piece we need is the ID of the Azure DevOps pipeline. Luckily this appears in the querystring of the URL when you navigate to the pipeline itself:

We now have everything we need to fetch all the builds for our pipeline for the given branch.

Finding artifacts associated with a build

The next stage is to find the artifacts associated with the build of the tag. Note that although we don't expect to have more than one build for the tag, we're handling that possibility just in case.

This stage assumes you know the name of the artifact you're looking for. In our case, the artifact name varies with the version, so must be provided as an argument

If we get to the end of this block, then we have a BuildArtifact which contains the details we need to download the files that make up the artifact.

Theoretically, I think you should be able to download the artifact contents using BuildHttpClient.GetArtifactContentZipAsync(), but I would get an exception whenever I tried to use this method. Instead, I resorted to old faithful HttpClient. The following code downloads the artifact contents (as a zip file) to the local directory.

And that's it! The API for interacting with Azure DevOps is actually quite nice, and makes a lot of sense, once you find the right NuGet and types, as well as the arbitrary IDs you need! It allowed us to cut out one of the steps from the release process, and reduce the chance of accidental errors.

In this post I described how you could interact with the the Azure DevOps REST API using the Microsoft.TeamFoundationServer.Client NuGet package. I described how to create a Personal Access Token for Azure DevOps, and where to find the various IDs required to interact with Azure DevOps Pipelines. Finally, I showed code to fetch all the builds for a given branch/tag, find the associated artifacts for the build, and how to download the artifact to a zip file. Hopefully you find this useful for automating your release processes too! 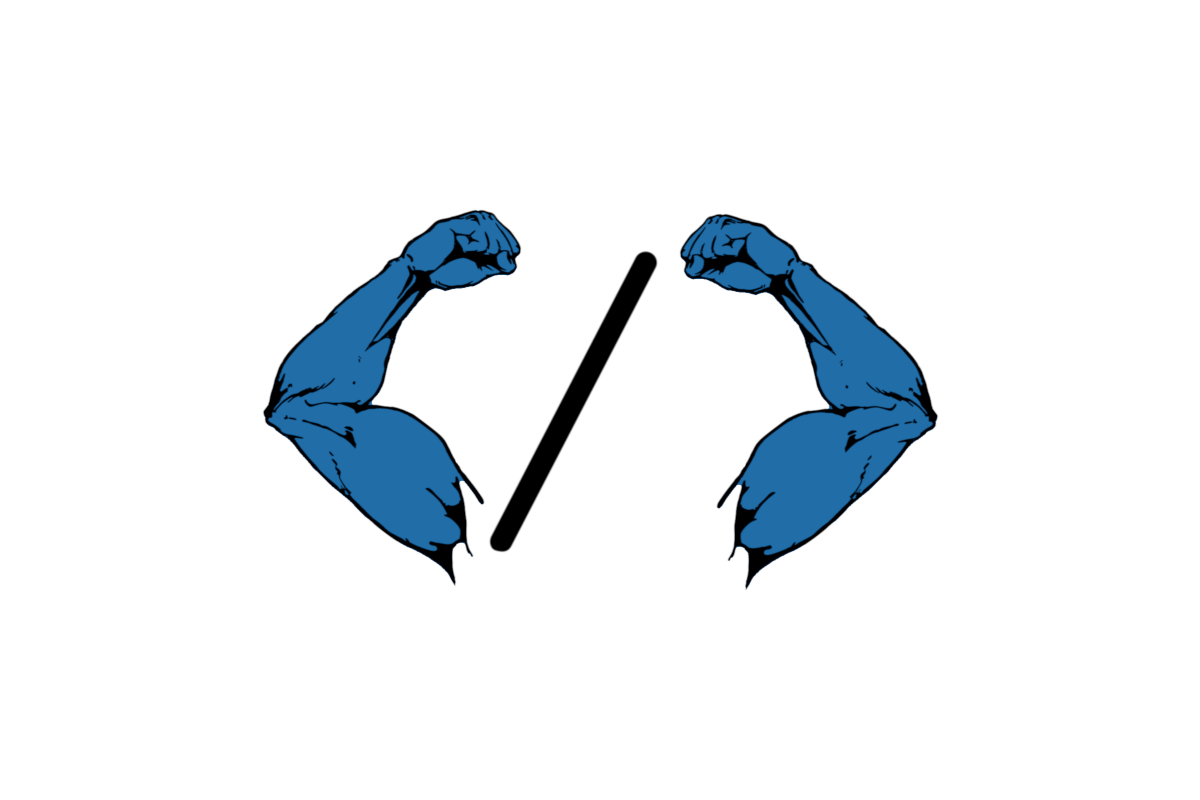 Next Using Source Generators with Blazor components in .NET 6