How to stop Visual Studio from creating launchsettings.json

In this short post I show how to stop an annoying behaviour of Visual Studio where it will keep creating a launchsettings.json file for integration test projects.

One of the great things about ASP.NET Core compared to the previous version of ASP.NET is that it's much easier to run integration tests. Being able to easily spin-up an instance of your app in a Docker container makes end-to-end testing far simpler.

In addition, ASP.NET Core allows for complete in-memory testing of your application, by using the TestServer available in the Microsoft.AspNetCore.TestHost package instead of Kestrel. This makes it easy to test your application inside a unit test, keeping everything in memory.

Note that TestServer doesn't support all the same features as Kestrel, so in some cases you may find differences in behaviour. I haven't personally run into any of those cases, but it's worth being aware of.

In addition to the Microsoft.AspNetCore.TestHost package that provides TestServer, Microsoft also provide a package called Microsoft.AspNetCore.Mvc.Testing. This package is designed specifically for testing MVC/Razor Pages applications, and handles some of the tricky extra tasks you need to do for things to work correctly:

I'm not going to go into the specifics of integration testing in this post. If you want to learn more, there are lots of resources available:

One of the only pre-requisites for using the Microsoft.AspNetCore.Mvc.Testing package is that your test project must reference the Web SDK in its project file (using <Project Sdk="Microsoft.NET.Sdk.Web">).

Unfortunately, this has one undesirable outcome: Visual Studio thinks that your test project is an ASP.NET Core application, so it "helpfully" creates a launchsettings.json file every time you open the project. This can be annoying, but I recently found out that we can tell Visual Studio to stop it! 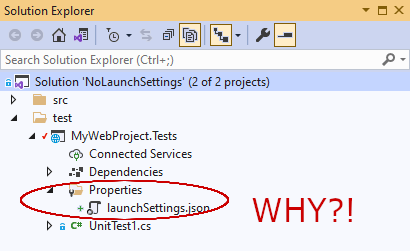 If we open the solution in Visual Studio Code, we can see that the web project has a launchsettings.json file in the Properties folder. This is standard and useful as it means we can easily control how we launch the application when developing locally by adding environment variables etc. 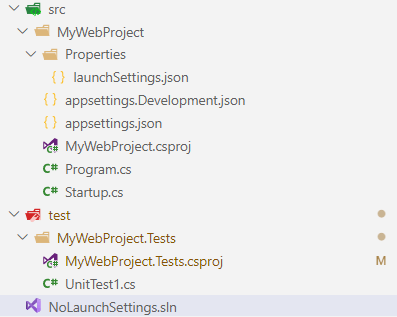 As I mentioned earlier, one of the pre-requisites for using the Microsoft.AspNetCore.Mvc.Testing package is that your test project must reference the Microsoft.NET.Sdk.Web SDK in its project file. Open the MyWebProject.Tests.csproj file in VS Code and change the first line from

We've finished the setup for our test solution now. Now lets see what Visual Studio does when we open our solution:

Visual Studio has seen the Microsoft.NET.Sdk.Web SDK reference, and thinks "oh, MyWebProject.Testing must be a web project, I'll be useful and create a launchsettings.json file". Unfortunately, this isn't useful, as it's a test project. We're not going to be running the test project directly, rather we're going to be running it indirectly using dotnet test.

It doesn't really matter if the file exists, but it irks me. Deleting the file just means that Visual Studio will recreate it later. Luckily, we can tell Visual Studio to stop it, and that we know better.

The simple solution is to add the NoDefaultLaunchSettingsFile property to your test application and set it to true, as shown in the following:

Now when we open the solution in Visual Studio, VS will leave our test project alone, keeping it nice and clean: 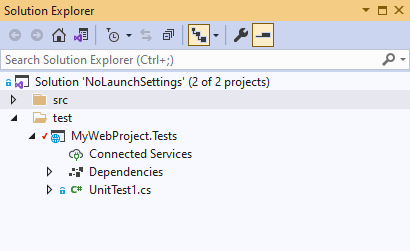 You can remove the existing launchsettings.json file using:

and rest easy with the knowledge that Visual Studio won't come back and recreate it again later!

By default, Visual Studio will generate a launchsettings.json file for any project that references the Microsoft.NET.Sdk.Web SDK. This is normally fine, but projects using the Microsoft.AspNetCore.Mvc.Testing package must also reference this SDK. This causes Visual Studio to generate the file for test projects that don't need it. To disable this behaviour, add <NoDefaultLaunchSettingsFile>true</NoDefaultLaunchSettingsFile> to your project file. 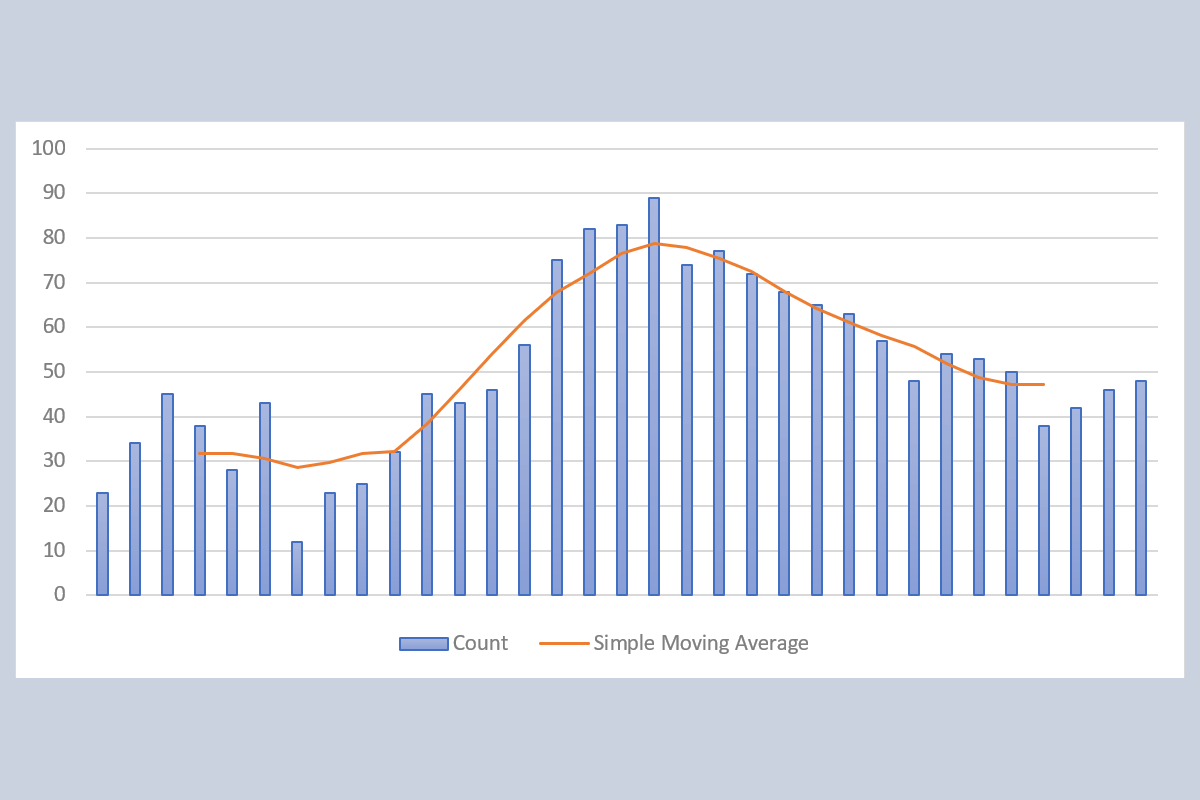 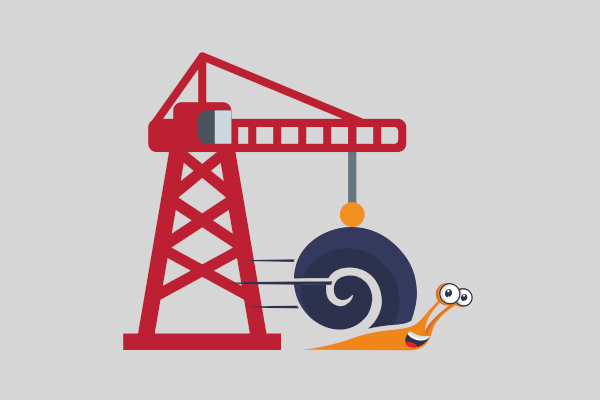 Next Benchmarking 4 reflection methods for calling a constructor in .NET