On the client-side, the prerendered HTML is displayed to the user while the WebAssembly app downloads in the background. Once the app has downloaded and started up, it takes over the rendering of the page, giving a purely client-side experience.

For many people, the fact that prerendering requires a server host app won't be a big deal. Probably most Blazor WebAssembly apps will need to talk to an ASP.NET Core Web API backend application, so you already have to run a server application. Adding static file hosting in this case isn't a big deal.

But what if you're creating a Blazor WebAssembly app that doesn't need an ASP.NET Core back-end? Maybe your app is only interacting with third-party APIs. Maybe it uses serverless APIs only. Or maybe it doesn't need any APIs at all! In these cases, requiring a host app just to add prerendering is a bit of a drag.

The goal: prerender every page in the application

In order to achieve prerendering without a host app, we need to prerender every logical page in our WebAssembly application. I'm calling this approach static prerendering, as it prerenders your application to static files.

For the default Blazor WebAssembly app I created in the previous post, that means prerendering the Index, Counter and FetchData components:

Our end goal is to have a separate prerendered HTML page for each of these pages. This will allow us to upload the app to a static-file hosting site, such as GitHub Pages or Netlify.

This approach, while great on the deployment side, has some limitations.

The limitations of this approach: cases to watch out for

If you have pages that display rapidly changing data, such as the random FetchData component, then it won't necessarily make sense to be prerendering your pages way in advance.

When using a host app for prerendering, the prerendering is happening a matter of seconds (at most) before the page is served to clients. However, with our static file approach, we're prerendering pages way in advance.

If your data quickly gets "old", then prerendering may actually give a worse experience than not prerendering at all. Displaying incorrect data (from the prerender, potentially days earlier), only to change it once the WebAssembly app boots up, could be a very bad move. In that case either don't use prerendering, don't prerender the problematic pages, or use a host app for prerendering.

In a similar vein, apps that you authenticate to can cause a problem for static prerendering. With static prerendering, you have a single prerendered HTML file for each page in your application. But if you can authenticate with your app, and that changes the HTML shown on the page (for example showing a "Hi [email protected]!" message) then the prerendered HTML won't match what the Blazor app will show after it boots up.

For example if you have a Razor Component defined like this:

Then the Name property will be dynamically populated based on the URL:

When prerendering with a host app, route parameters cause no problem. The URL is available at prerender time, and dynamic text can be generated.

For static prerendering, we have to prerender all pages ahead of time. That means we need to know every value that {name} can take so we can prerender an HTML file for each of them: 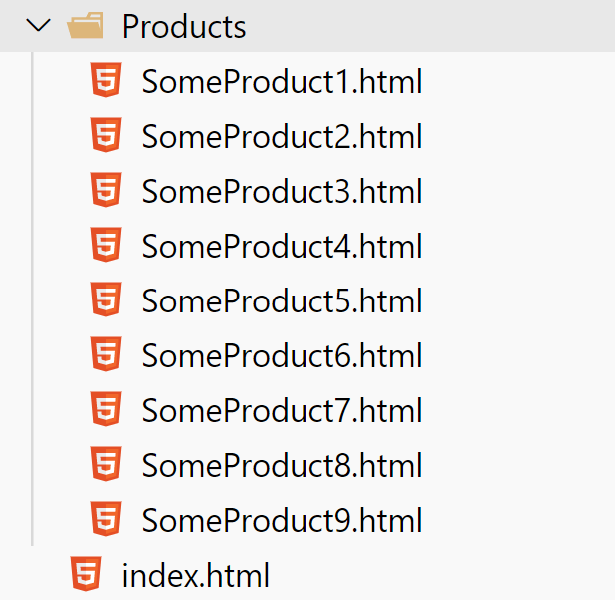 In some cases, the possible values of {name} may be known in advance. For example, you may be able to iterate (and prerender) all of the products in a product catalogue ahead of time. However, if these values aren't known, or the number of options is too great, then static prerendering may not be a good solution.

Now I've dampened everyone's spirits it's time to look at how to actually make this work!

At it's heart, the concept behind static prerendering is very simple:

For every routable page in your WebAssembly application, render the app, and save the output as an HTML file.

To achieve this, I'll use two things:

The host app that does the prerendering is exactly the same application as I configured in my previous post. All I'm doing is adding a way of "capturing" the prerendered output from the host app. I used a test app for convenience (as I wanted to run actual integration tests on the output too), but you could easily use a simple console app instead. 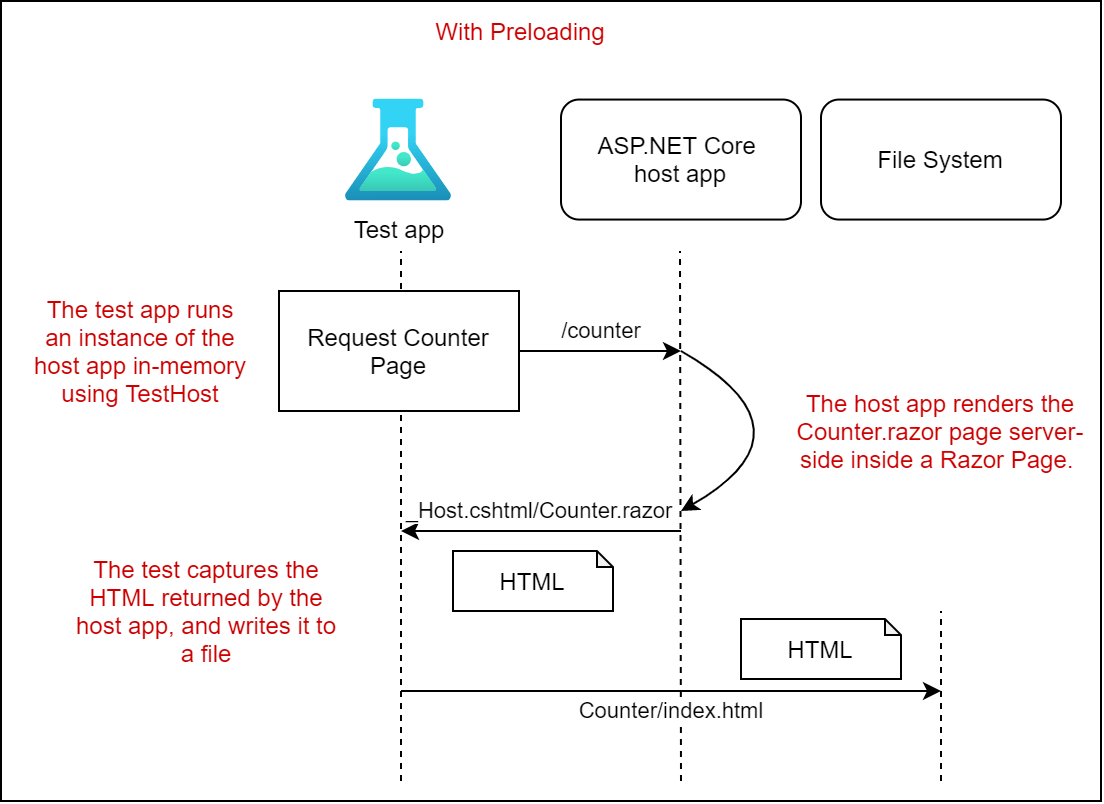 In the next section I'll describe how to create the test project that captures the output.

Creating a project to statically prerender

We start by creating an xUnit test project called PreRenderer, adding the integration testing package, and adding a reference to our host ASP.NET Core app, Blazor1.Server:

Next, we'll create a simple WebApplicationFactory that will enable us to run the host ASP.NET Core app in-memory using TestHost.

This test fixture is very basic currently, we're reusing the server app's IHostBuilder and making a single modification—we're updating the IHostingEnvironment to be Production. That's because we want to render our production data here!

Note that this would mean that whatever is running these tests and generating the prerendered output would need access (and credentials) for production assets. That's another thing to think about when deciding whether static prerendering is right for you!

Now we can create the code that generates the prerendered HTML documents. I opted to use an XUnit theory test, so that each execution of the test renders a separate page.

Most of this method is building the destination file path to write our prerendered content:

You can run the test in Visual Studio/Rider using the normal test runner, if you add a RenderOutputDirectory key to your host app's appsettings.json file:

This will write the content to a sub-folder called RenderOutput in the test project's bin directory (e.g. ./PreRenderer/bin/Debug/net5.0/RenderOutput). You can also use an absolute path if you wish.

Unfortunately, if you execute this test as-is, the /fetchdata path will fail:

The problem is the hacky fix for HttpClient I put in place in the previous post. Well, one good hack deserves another…

If you remember back to the previous post, our WebAssembly app uses an HttpClient instance to asynchronously load data from the server.

In the non-hosted version of the default Blazor WebAssembly template, this loads the data from a static JSON file.

To workaround this, in the previous post I configured an HttpClient in the host app that looped back to itself, making an outgoing network call to itself:

Unfortunately, when we're running using the TestHost, this code won't work. The TestHost doesn't actually expose an HTTP endpoint, it runs in memory, so in this case, addressFeature will be null. The easy hacky fix for this is to replace the HttpClient dependency used by the server app with one that points to the TestHost itself directly. Update to the test fixture to the following:

Serving static assets in the TestHost

The /fetchdata path fails this time because the request for /sample-data/weather-forecast.json returns a 404 response … 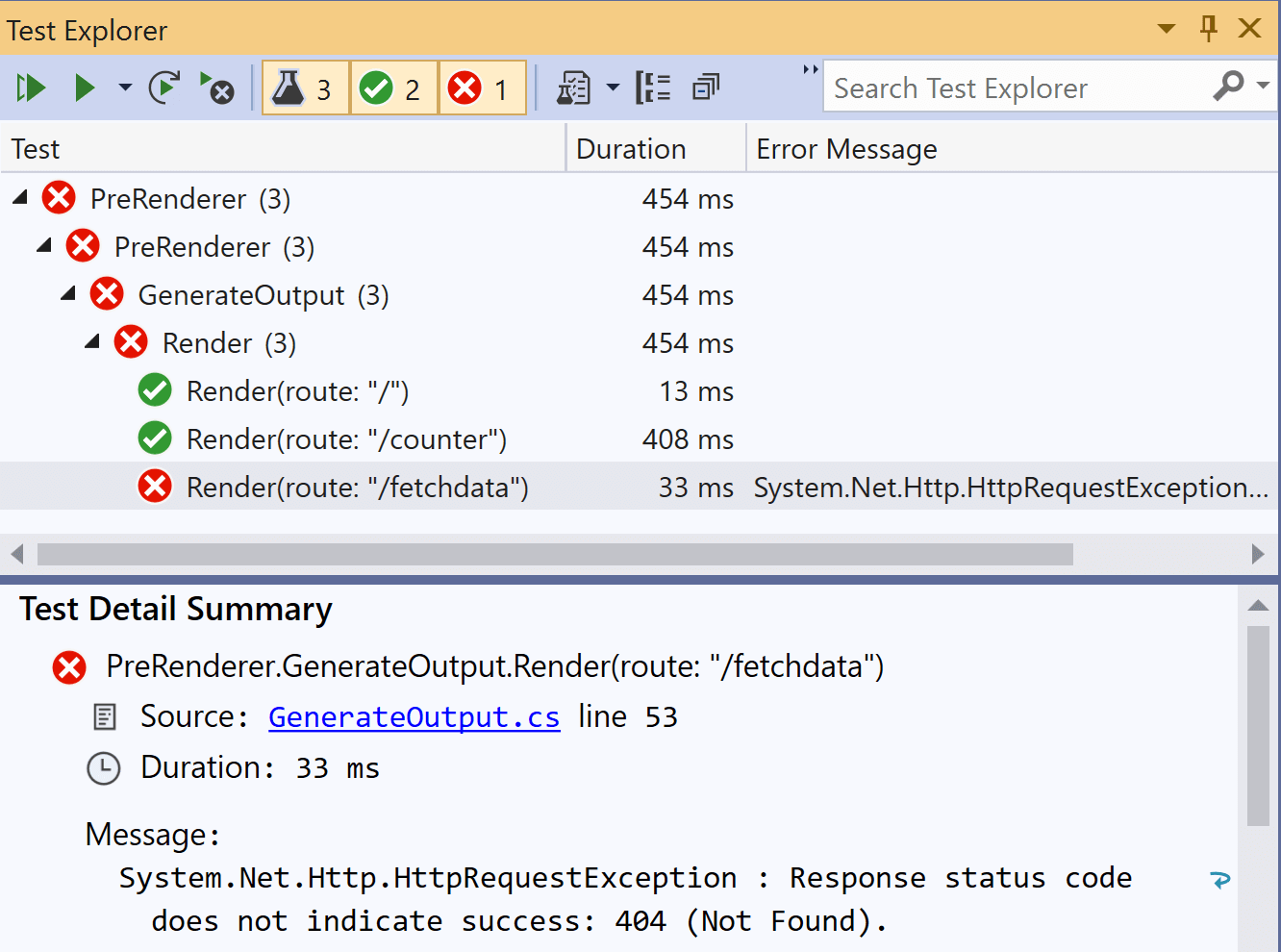 The problem is that the StaticFileMiddleware isn't loading the StaticWebAssets from the WebAssembly app correctly. This post is long enough, so I'm not going to go into the reasons why here, but you can resolve the issue by adding UseStaticWebAssets() in the ConfigureWebHost method:

With this addition, the tests all pass, and the output is rendered for all our routes:

or, if you prefer PowerShell (and are interactively executing the commands)

After running these, you'll have an output that looks something like the following: 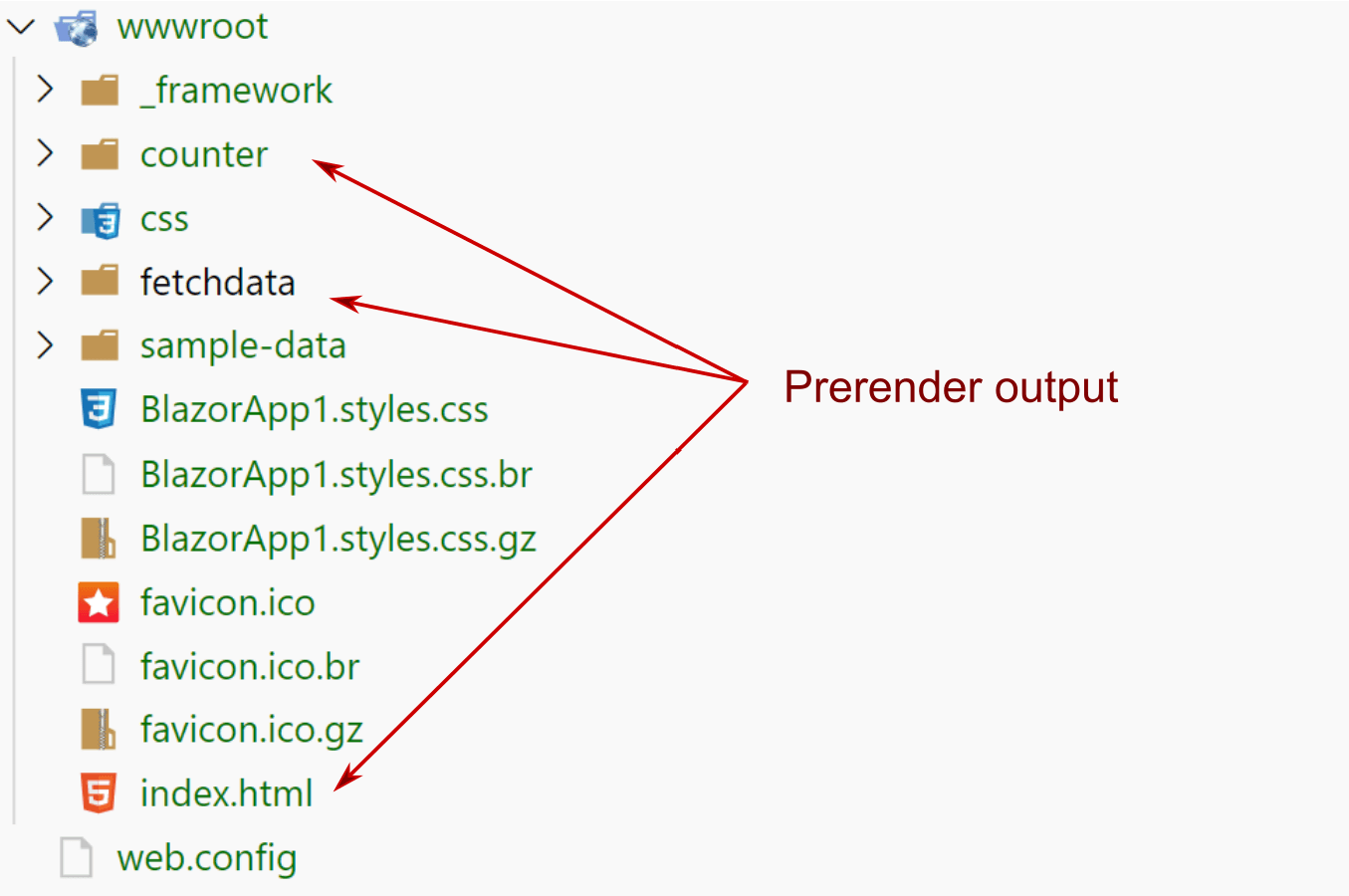 You can now deploy these files to static file hosting. For testing, I used the dotnet-serve global tool to serve the contents of the directory, and to confirm the prerendered files are served correctly:

So there's obviously quite a few issues and limitations here. I highlighted a few of them earlier, and we ran into the issue with StaticWebAssets earlier, but there's another annoying issue I glossed over: we're currently listing out all the WebAssembly page routes that need to be rendered in the test project as Theory data:

In the next post, I'll look at improving that aspect, so you don't have to keep track of the possible routes in your test project.

Prerendering can give an improved experience for users, as meaningful HTML is returned in the initial response. With Blazor WebAssembly, that typically means you must host your application inside an ASP.NET Core app which is responsible for performing the prerendering. Unfortunately, that means you can no longer host your app as static files.

In this post, I showed an approach to "statically prerender" all the pages in your application to HTML files ahead of time. This allows you to both use prerendering and to host your WebAssembly app in static file hosting.

This approach has some trade-offs. Most notably, you must be able to define all the possible routes in your application ahead of time, and these should not change depending on the user, or other dynamic data. 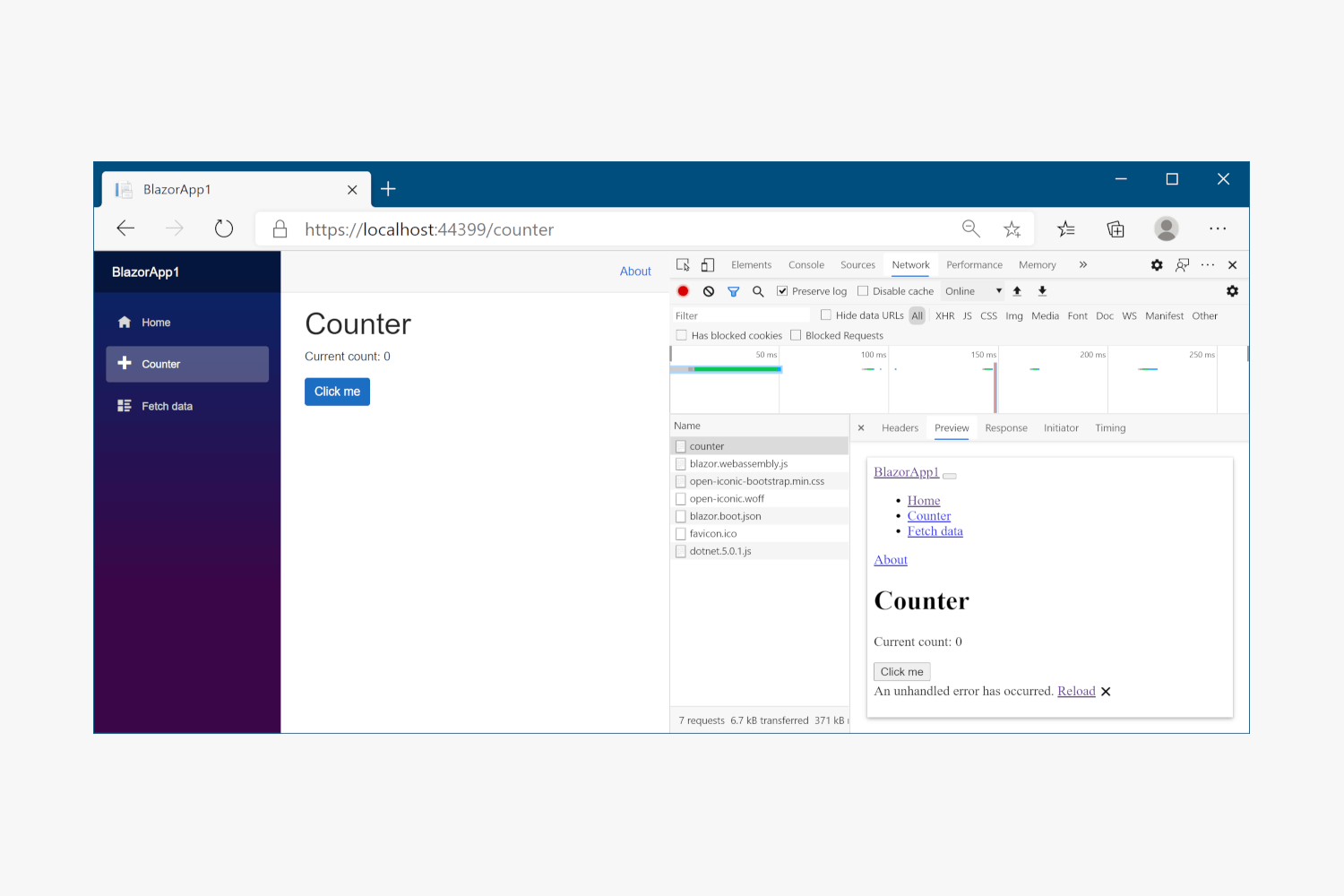 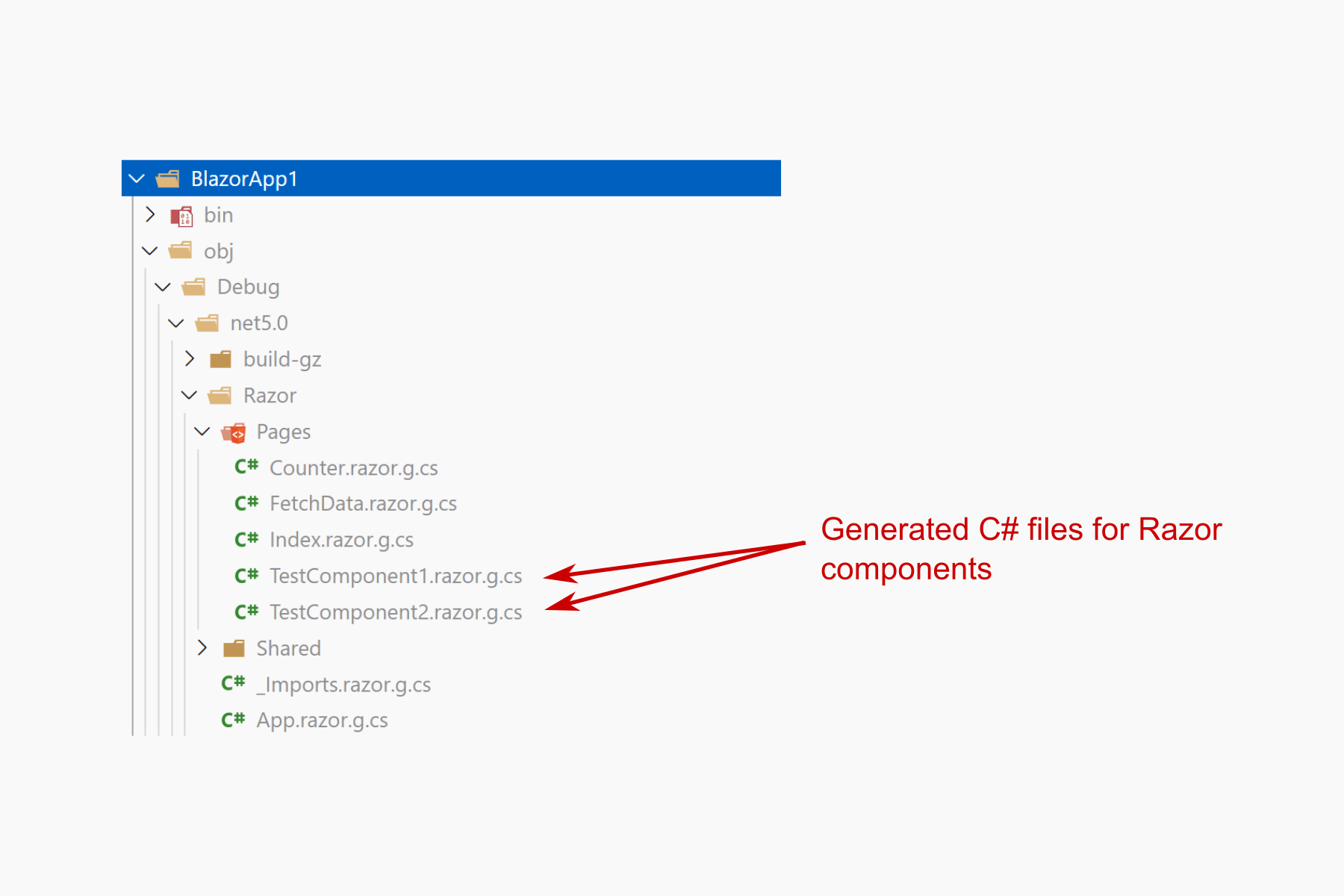 Next Finding all routable components in a Blazor App