In this post I discuss how dependency injection scopes work in the context of IHttpClientFactory. The title of this post reflects the fact that they don't work like I previously expected them to!

In this post I look at how dependency injection scopes work when you're using IHttpClientFactory, how they relate to the "typical" request-based DI scope used in ASP.NET Core, and the implications of that for custom message handler implementations.

We'll start with a very brief overview of IHttpClientFactory and DI scopes, and then look at how the two interact.

IHttpClientFactory allows you to create HttpClient instances for interacting with HTTP APIs, using best practices to avoid common issues related to socket exhaustion and not respecting DNS settings. It does this by managing the HttpMessageHandler chain separately from the HttpClient instances.

You can read about how IHttpClientFactory achieves this in my previous post but in brief:

That's obviously a very brief summary, but if you're not already familiar with IHttpClientFactory, I suggest reading Steve Gordon's series first.

In ASP.NET Core, services can be registered with the dependency injection (DI) container with one of three lifetimes:

Singleton and transient are the simplest, as they take the lifetime of a component to an extreme. Scoped is slightly more complex, as the behaviour varies depending on whether you are in the context of the same scope.

The pseudo code below demonstrates this - it won't compile, but hopefully you get the idea.

The main question is when are those scopes created?

In ASP.NET Core, a new scope is created for each request. So each request uses a different instance of a scoped service.

A common example of this is EF Core's DbContext - the same instance of this class is used throughout a request, but a different instance is used between requests.

This is by far the most common way to interact with scopes in ASP.NET Core. But there are special cases where you need to "manually" create scopes, when you are executing outside of the context of a request. For example:

It's generally pretty apparent when you're running into an issue like this, as you're trying to access scoped services from a singleton context.

Where things really get interesting is when you're consuming services from scopes with overlapping lifetimes. That sounds confusing, but it's something you'll need to get your head around if you create custom HttpMessageHandlers for IHttpClientFactory!

I've really emphasised that, as it's something I didn't understand from the documentation and previous posts on IHttpClientFactory. The documentation constantly talks about a "pool" of handlers, but that feels a bit misleading to me - there's only a single handler in the "pool" used to create new instances of HttpClient. That's not what I think of as a pool!

The documentation isn't incorrect per-se, but it does seem a bit misleading. This image seems to misrepresent the situation for example. That's part of the reason for my digging into the code behind IHttpClientFactory and writing it up in my previous post.

My assumption was that a "pool" of available handlers were maintained, and that IHttpClientFactory would hand out an unused handler from this pool to new instances of HttpClient.

That is not the case.

A single handler pipeline will be reused across multiple calls to CreateClient(). After 2 minutes, this handler is "expired", and so is no longer handed out to new HttpClients. At that point, you get a new active handler, that will be used for all subsequent CreateClient() calls. The expired handler is moved to a queue for clean up once it is no longer in use. 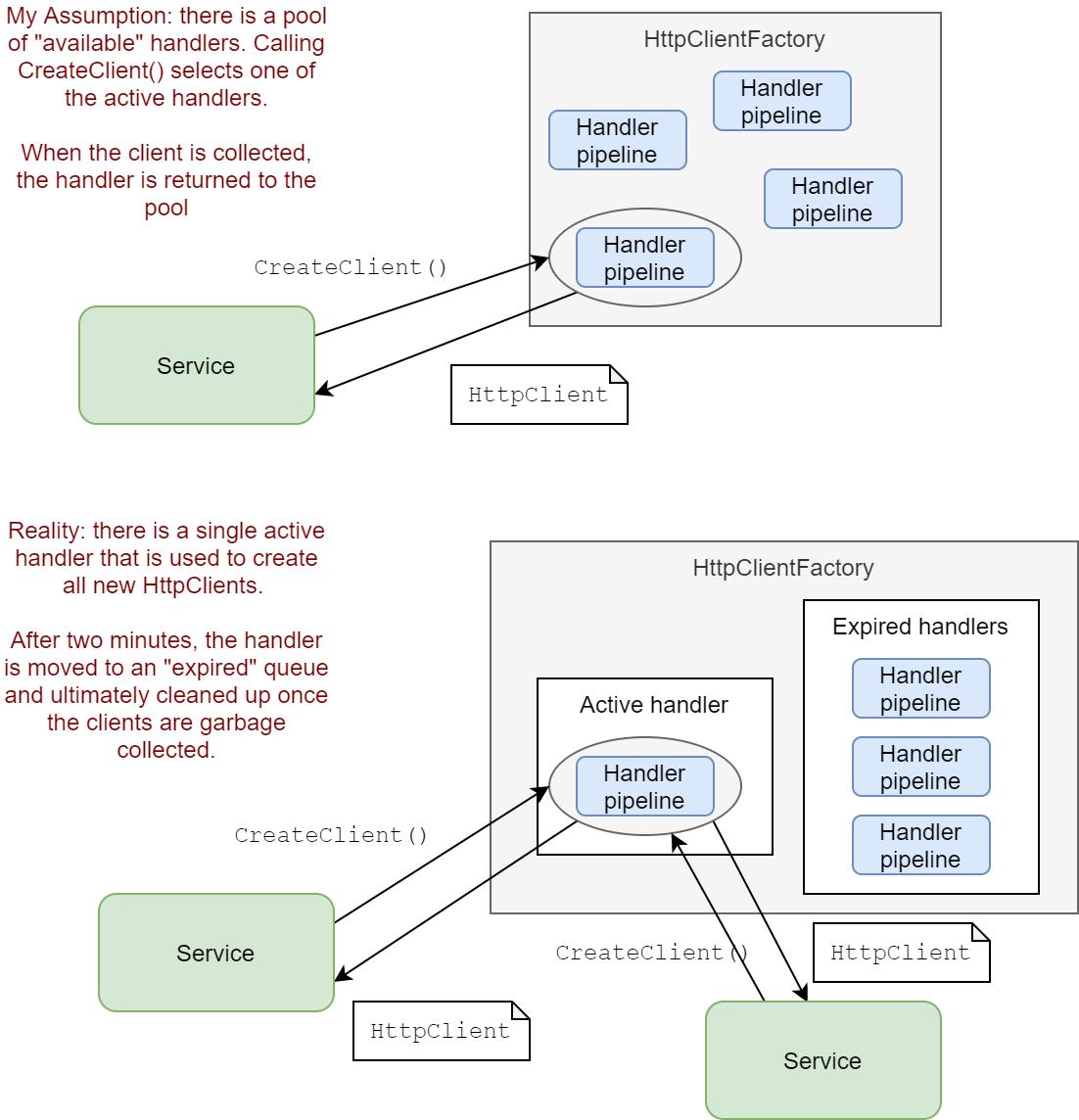 The fact that the handler pipeline is shared between multiple HttpClient instances isn't a problem in terms of thread safety—after all, the advice prior to IHttpClientFactory was to use a single HttpClient for your application. Where things get interesting is the impact this has on DI scopes, especially if you're writing your own custom HttpMessageHandlers.

This brings us to the crux of this post—the duration of a DI scope with IHttpClintFactory.

This was something I hadn't given much though to, given my previous misconceptions of the "pool" of handler pipelines. The next question is: does this cause us any problems? The answer (of course) is "it depends".

Before we get to that, I'll provide a concrete example demonstrating the behaviour above.

An example of unexpected (for me) scoped service behaviour in IHttpClientFactory

Lets imagine you have some "scoped" service, that returns an ID. Each instance of the service should always return the same ID, but different instances should return different IDs. For example:

You also have a custom HttpMessageHandler. Steve discusses custom handlers in his series, so I'll just present a very basic handler below which uses the ScopedService defined above, and logs the InstanceId:

Next, we'll add a named HttpClient client in ConfigureServices(), and add our custom handler to its handler pipeline. You also have to register the ScopedMessageHandler as a service in the container explicitly, along with the ScopedService implementation:

Finally, we have an API controller to test the behaviour. The controller below does two things:

All this setup is designed to demonstrate the relationship between different ScopedServices. Lets take a look at the logs when we make two requests in quick succession

As expected for a scoped service, the "Service ID in controller" log message changes with each request. The DI scope lasts for the length of the request: each request uses a different scope, so a new ScopedService is injected each request.

However, the ScopedService in the ScopedMessageHander is the same across both requests, and it's different to the ScopedService injected into the ValuesController. That's what we expect based on the discussion in the previous section, but it's not what I expected when I first started looking into this!

After two minutes, if we send another request, you'll see the "Service ID in handler" has changed. The handler pipeline from previous requests expired, and a new handler pipeline was created:

So, the question is: does it matter?

Does having mis-matched scopes matter?

The simple answer is: probably not.

If any of the following are true, then there's nothing to worry about:

The only situation I think you could run into issues is:

The main example I can think of is EF Core.

A common pattern for EF Core is a "unit of work", that creates a new EF Core DbContext per request, does some work, and then persists those changes at the end of the request. If your custom handler needs to coordinate with the unit of work, then you could have problems unless you do extra work.

For example, imagine you have a custom handler that writes messages to an EF Core table. If you inject a DbContext into the custom handler, it will be a different instance of the DbContext than the one in your request. Additionally, this DbContext will last for the lifetime of the handler (2 minutes), not the short lifetime of a request.

So if you're in that situation, what should you do?

Accessing the Request scope from a custom HttpMessageHandler

Luckily, there is a solution. To demonstrate, I'll customise the ScopedMessageHander shown previously, so that the ScopedService it uses comes from the request's DI scope, instead of the DI scope used to create the custom handler. The key, is using IHttpContextAccessor.

This approach uses the IHttpContextAccessor to retrieve the IServiceProvider that is scoped to the request. This allows you to retrieve the same instance that was injected into the ValuesController. Consequently, for every request, the logged values are the same in both the controller and the handler:

In most cases, this won't be a problem, but if an HttpMessageHandler requires using services from the "main" request then you can't use naïve constructor injection. Instead, you need to use IHttpContextAccessor to access the current request's HttpContext and IServiceProvider. 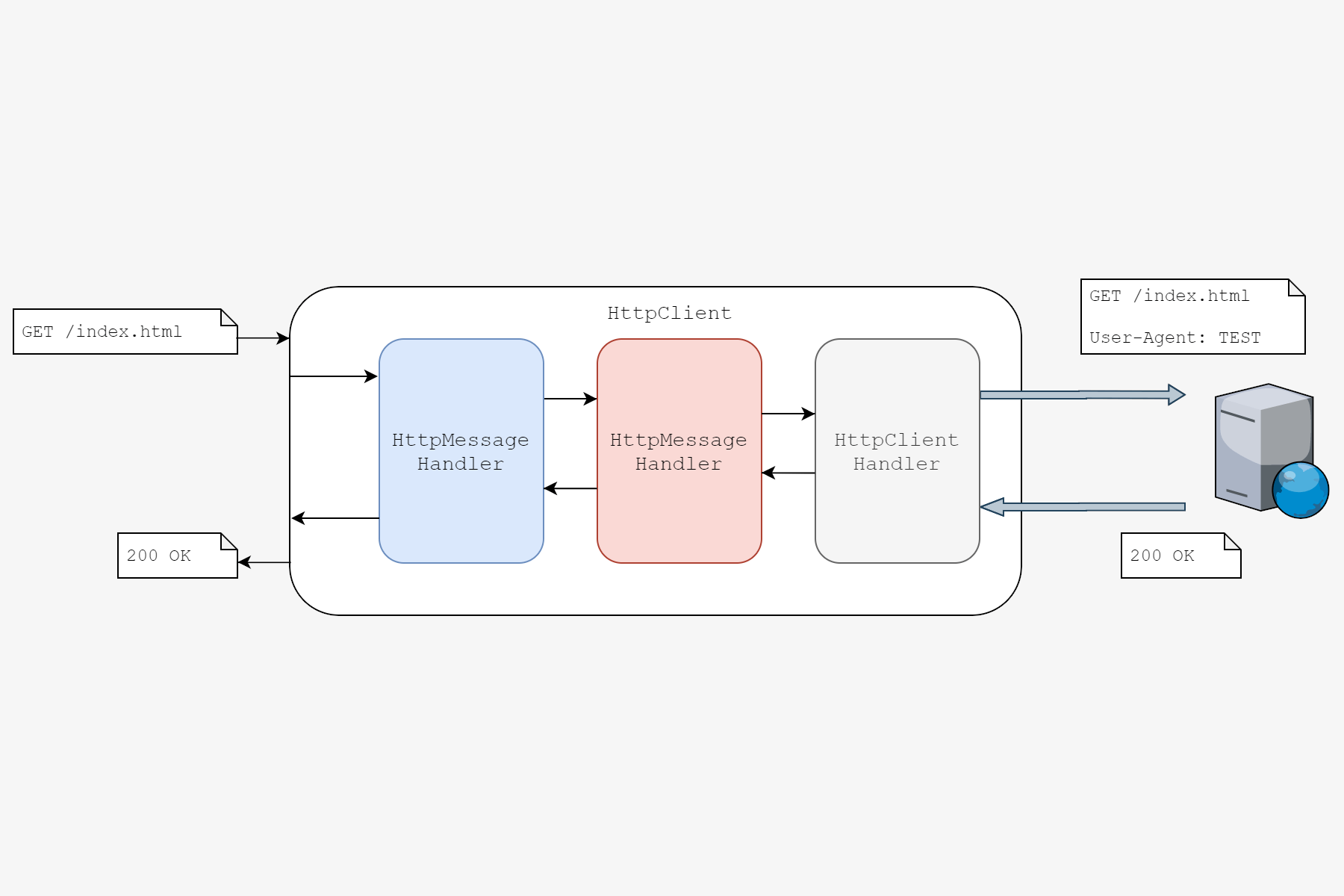 Previous Exploring the code behind IHttpClientFactory in depth