One of the key features of ASP.NET Core is baked in dependency injection. There may be various disagreements on the way that is implemented, but in general encouraging a good practice by default seems like a win to me.

Whether you choose to use the built in container or a third party container will likely come down to whether the built in container is powerful enough for your given project. For small projects it may be fine, but if you need convention based registration, logging/debugging tools, or more esoteric approaches like property injection, then you'll need to look elsewhere. Luckily, third party container are pretty easy to integrate, and are going to be getting easier.

Why use the built-in container?

One question that's come up a few times, is whether you can use the built-in provider in a .NET Core console application? The short answer is not out-of-the-box, but adding it in is pretty simple. Having said that, whether it is worth using in this case is another question.

One of the advantage of the built-in container in ASP.NET Core is that the framework libraries themselves register their dependencies with it. When you call the AddMvc() extension method in your Startup.ConfigureServices method, the framework registers a whole plethora of services with the container. If you later add a third-party container, those dependencies are passed across to be re-registered, so they are available when resolved via the third-party.

If you are writing a console app, then you likely don't need MVC or other ASP.NET Core specific services. In that case, it may be just as easy to start right off the bat using StructureMap or AutoFac instead of the limited built-in provider.

Having said that, most common services designed for use with ASP.NET Core will have extensions for registering with the built in container via IServiceCollection, so if you are using services such as logging, or the Options pattern, then it is certainly easier to use the provided extensions, and plug a third party on top of that if required.

Adding DI to a console app

If you decide the built-in container is the right approach, then adding it to your application is very simple using the Microsoft.Extensions.DependencyInjection package. To demonstrate the approach, I'm going to create a simple application that has two services:

Each of these services will have a single implementation. The BarService depends on an IFooService, and the FooService uses an ILoggerFactory to log some work:

As you could see above, I'm using the new logging infrastructure in my app, so I will need to add the appropriate package to my project.json. I'll also add the DependencyInjection package and the Microsoft.Extensions.Logging.Console package so I can see the results of my logging:

Finally, I'll update my static void main to put all the pieces together. We'll walk through through it in a second.

The first thing we do is configure the dependency injection container by creating a ServiceCollection, adding our dependencies, and finally building an IServiceProvider. This process is equivalent to the ConfigureServices method in an ASP.NET Core project, and is pretty much what happens behind the scenes. You can see we are using the IServiceCollection extension method to add the logging services to our application, and then registering our own services. The serviceProvider is our container we can use to resolve services in our application.

In the next step, we need to configure the logging infrastructure with a provider, so the results are output somewhere. We first fetch an instance of ILoggerFactory from our newly constructed serviceProvider, and add a console logger.

If can then run our application and see all our beautifully resolved dependencies! 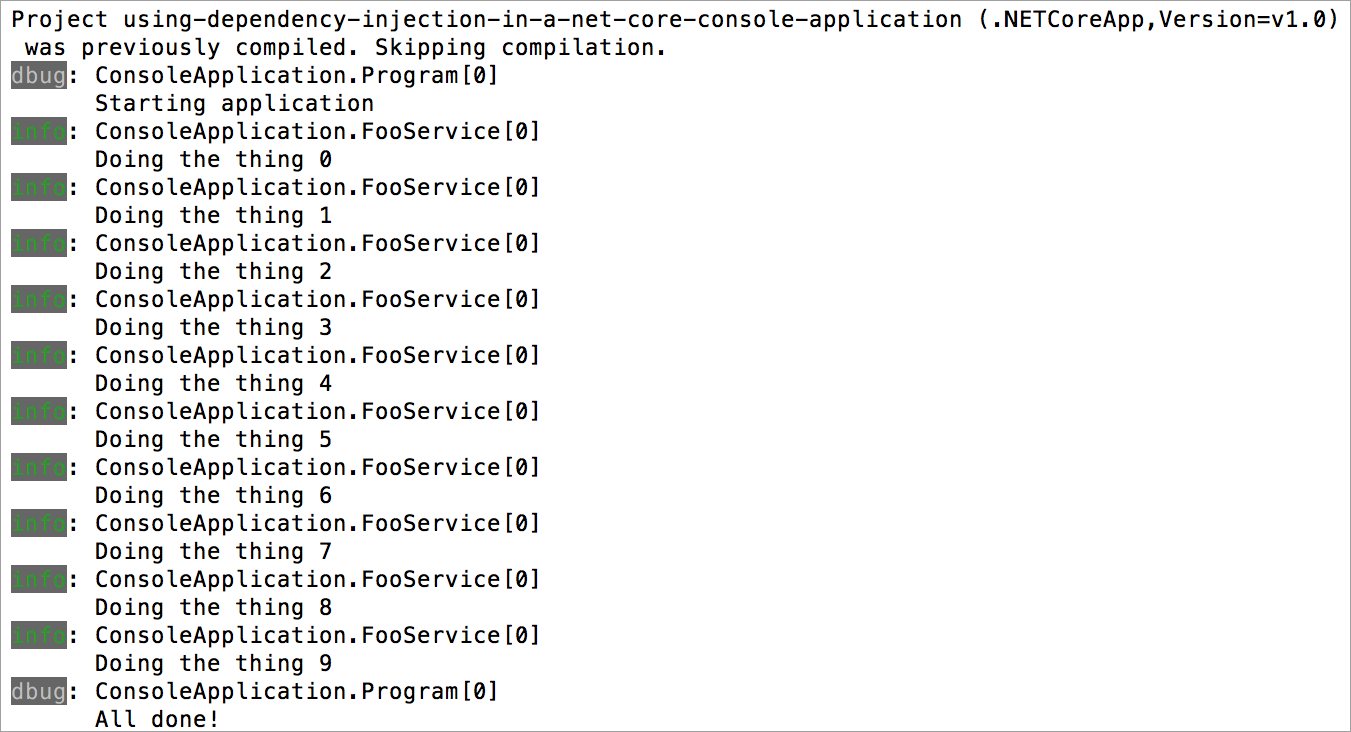 Adding StructureMap to your console app

As described previously, the built-in container is useful for adding framework libraries using the extension methods, like we saw with AddLogging above. However it is much less fully featured than many third-party containers.

For completeness, I'll show how easy it is to update the application to use a hybrid approach, using the built in container to easily add any framework dependencies, and using StructureMap for your own code. If you want a more detailed description of adding StructureMap to and ASP.NET Core application, see the post here.

First you need to add StructureMap to your project.json dependencies:

Now we'll update our static void main to use StructureMap for registering our custom dependencies:

At first glance this may seem more complicated than the previous version, and it is, but it is also far more powerful. In the StructureMap example, we didn't have to explicitly register our IFooService or IBarService services - they were automatically registered by convention. When your apps start to grow, this sort of convention-based registration becomes enormously powerful, especially when couple with the error handling and debugging capabilities available to you.

In this example I showed how to use StructureMap with the adapter to work with the IServiceCollection extension methods, but there's obviously no requirement to do that. Using StructureMap as your only registration source is perfectly valid, you'll just have to manually register any services added as part of the AddPLUGIN extension methods directly.

In this post I discussed why you might want to use the built-in container for dependency injection in a .NET Core application. I showed how you could add a new ServiceCollection to your project, register and configure the logging framework, and retrieve configured instances of services from it.

Finally, I showed how you could use a third-party container in combination with the built-in container to allow you to use more powerful registration features, such as convention based registration.

You can find an example project, along with many others for posts on my blog on Github here. 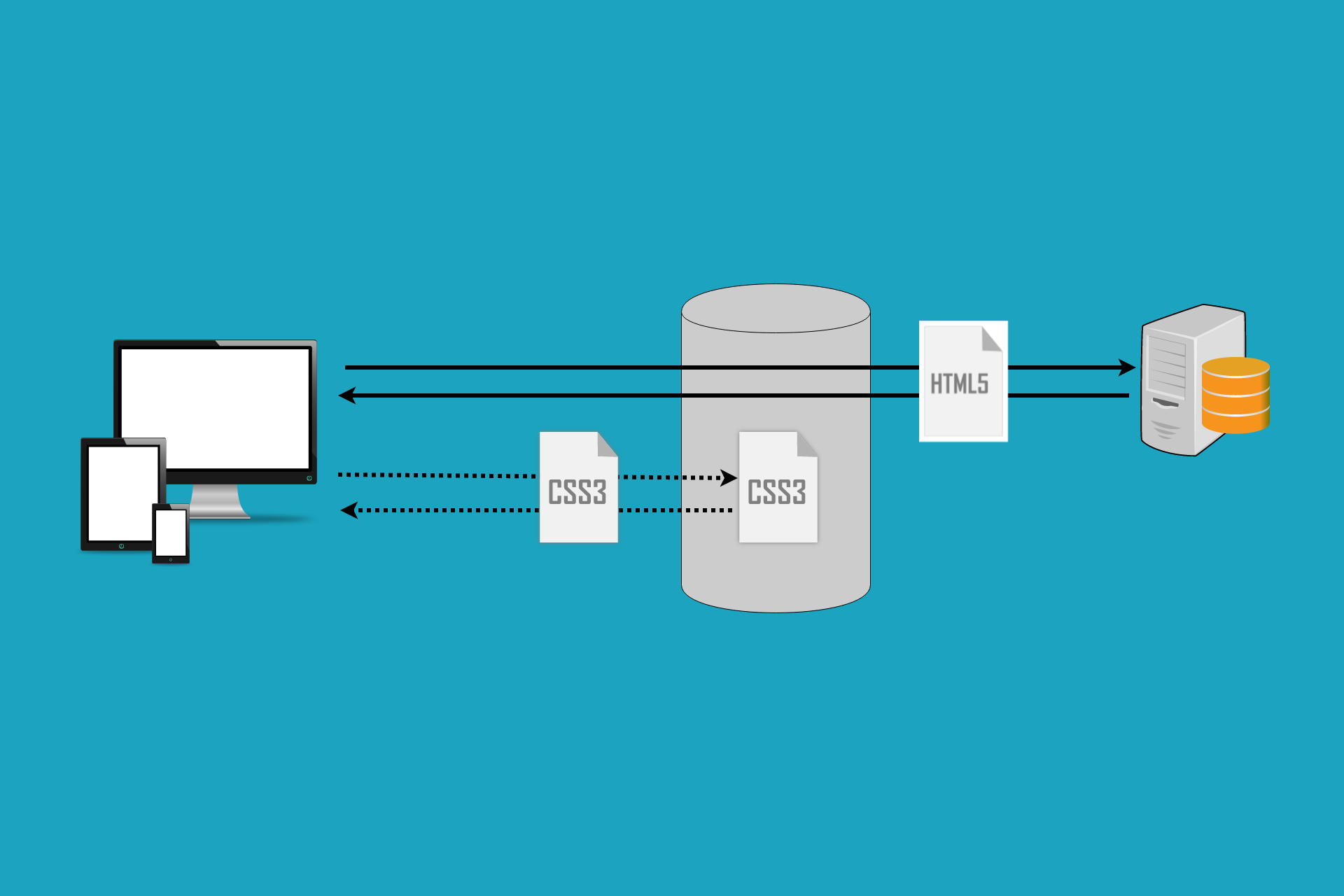 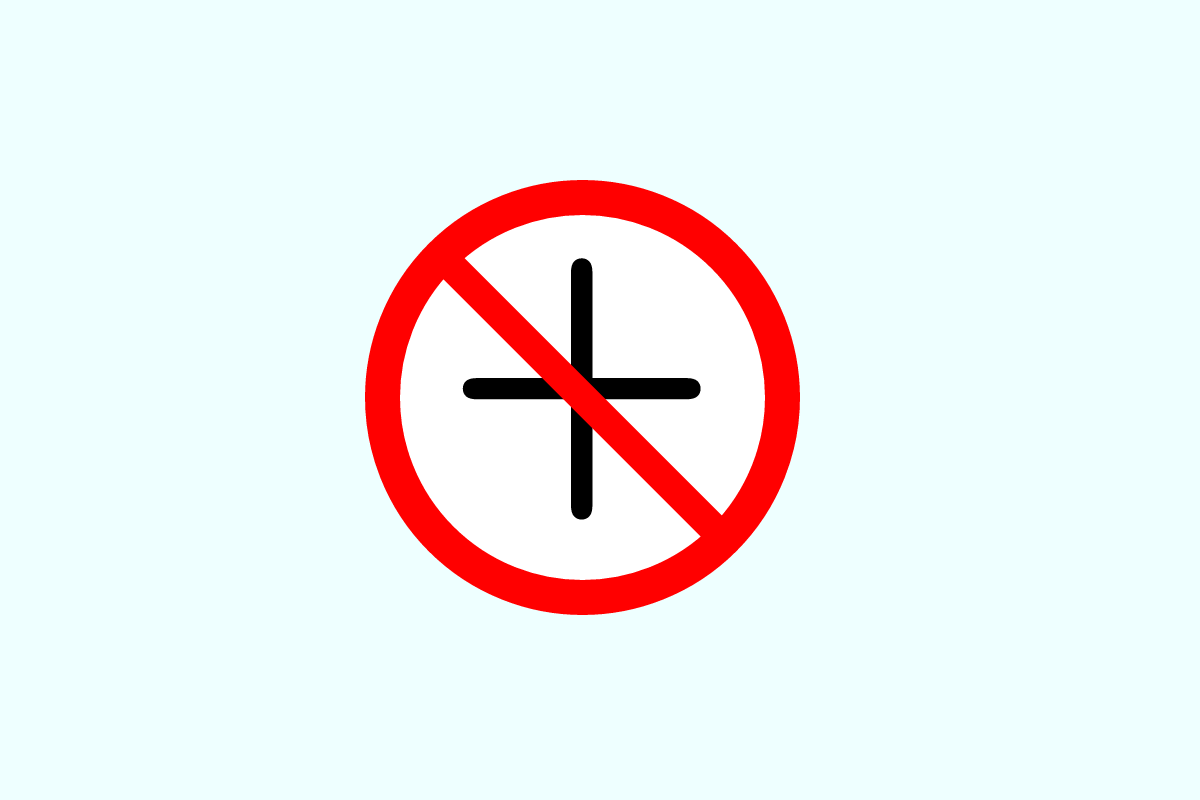 Next Fixing a bug: when concatenated strings turn into numbers in JavaScript