In this post I'll describe a lesser-known property on HttpRequest called PathBase. I describe what it does, when it's useful, and how to use it.

That's all a bit abstract, so let's look at an example. Let's say you have a middleware pipeline that consists of the PathBaseMiddleware (more on this later), a Map "side-branch", and some terminal middleware (which always return a response describing the Path and PathBase values)

Don't be confused by the Map() function; this isn't minimal APIs, this is pure ASP.NET Core middleware branching. I'm deliberately avoiding the routing system at the moment, we'll add it in again shortly!

The image below attempts to visualize it, and also follows the progress of 2 requests:

As shown in the diagram, the rules for PathBase in this situation are:

Branching middleware pipelines can be very useful, but I haven't seen it used a huge amount these days outside of multi-tenant or specialised scenarios.

I also don't see the PathBaseMiddleware mentioned much, but I have found it useful in the past.

Using the PathBaseMiddleware to strip off a prefix

So the purpose of the PathBaseMiddleware is to remove an optional prefix from a request. When would this be useful?

I realise that most proxies will allow you to strip off the prefix as part of the routing, but I'm ignoring that case for now!

PathBase provides a mechanism to do this in one place across your app. When generating links with LinkGenerator, it will take the PathBase into account, but for routing purposes it will only look at the Path part.

For an example of this, consider the following minimal API setup. This creates 2 endpoints

This builds a pipeline that looks something like the following:

If we run this app and test each API, with and without the prefix, you get the following results

Note that in both cases, the Path at the point the UseRouting() middleware is executed is the same, so routing works the same both times. But we're not losing that prefix information, so LinkGenerator can use it to generate links to the correct place in your application.

Placing UsePathBase() in the correct location

You should note that in the above example I placed the UseRouting() call after the call to UsePathBase(). That was important. If we swap those two calls in the middleware pipeline, then the behaviour is very different. To demonstrate that I'm going to add a third endpoint, a fallback, which is called if no other endpoint executes:

The first two requests, in which we don't provide the /myapp prefix, are routed to the correct endpoint, just as before. If the UsePathBase() prefix isn't provided, it's a noop, so this is as expected.

However, requests which do include the PathBase prefix aren't routed correctly. They are both falling back to the fallback endpoint. However, you can see in the fallback response that the PathBase and Path values are as we would expect. They're the same as in the previous case when UseRouting() was placed after UsePathBase(), so why isn't it routing correctly? The following diagram tries to demonstrate the issue:

However, when the request continues through the middleware pipeline, it then encounters the PathBaseMiddleware, which moves the /myapp prefix into PathBase. But by that point, it's too late for the routing!

Based on these examples, you will generally want to place the call to UsePathBase() before your call to UseRouting(). Where that gets tricky is if you're using the new WebApplication builder with minimal hosting in .NET 6. As I described in my previous post, WebApplication adds an implicit call to UseRouting(), so you have to be careful about when you call UsePathBase(). I'll explore this in the next post, showing the problem, and some ways to work around it. 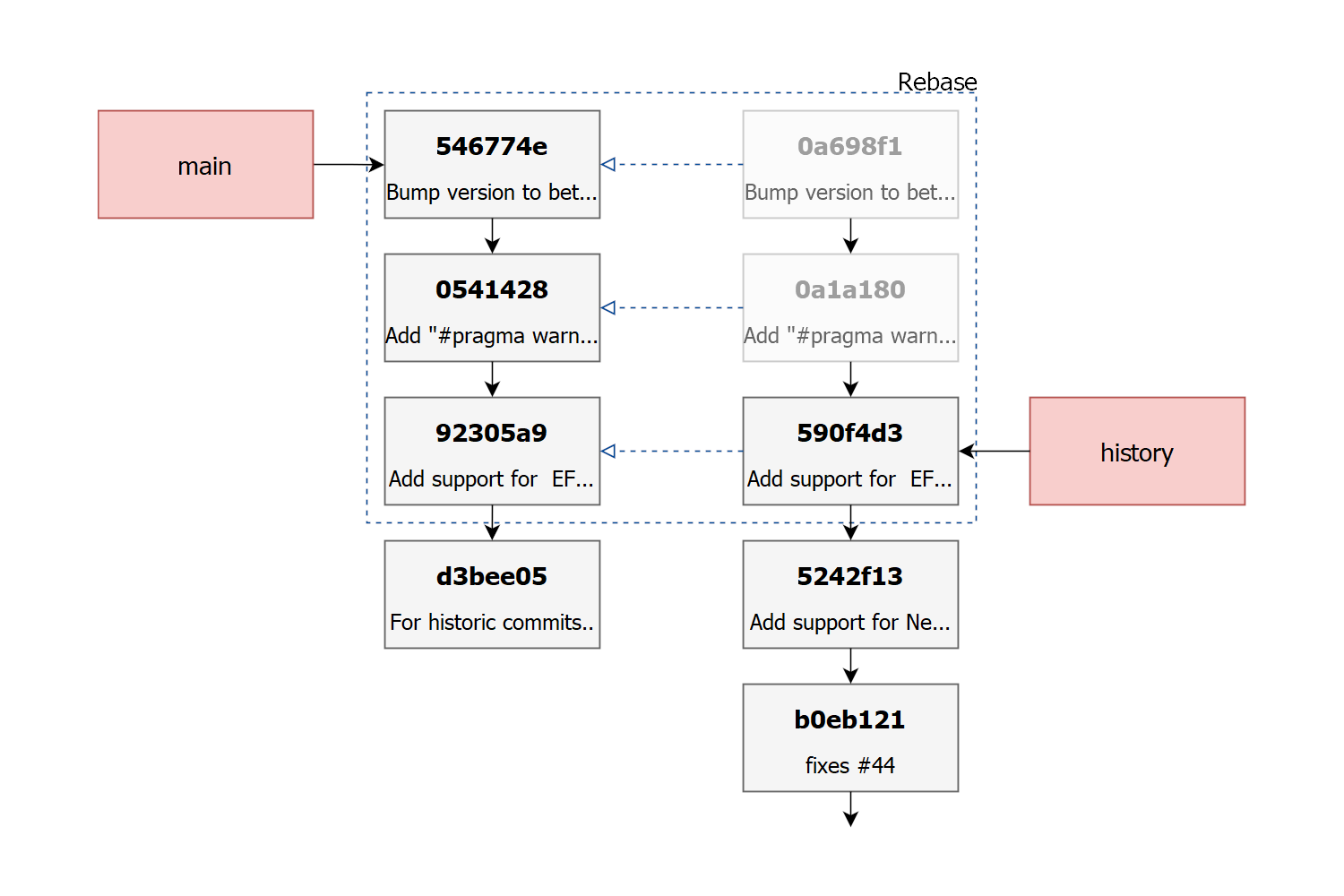 Previous Reducing the size of a git repository with git-replace 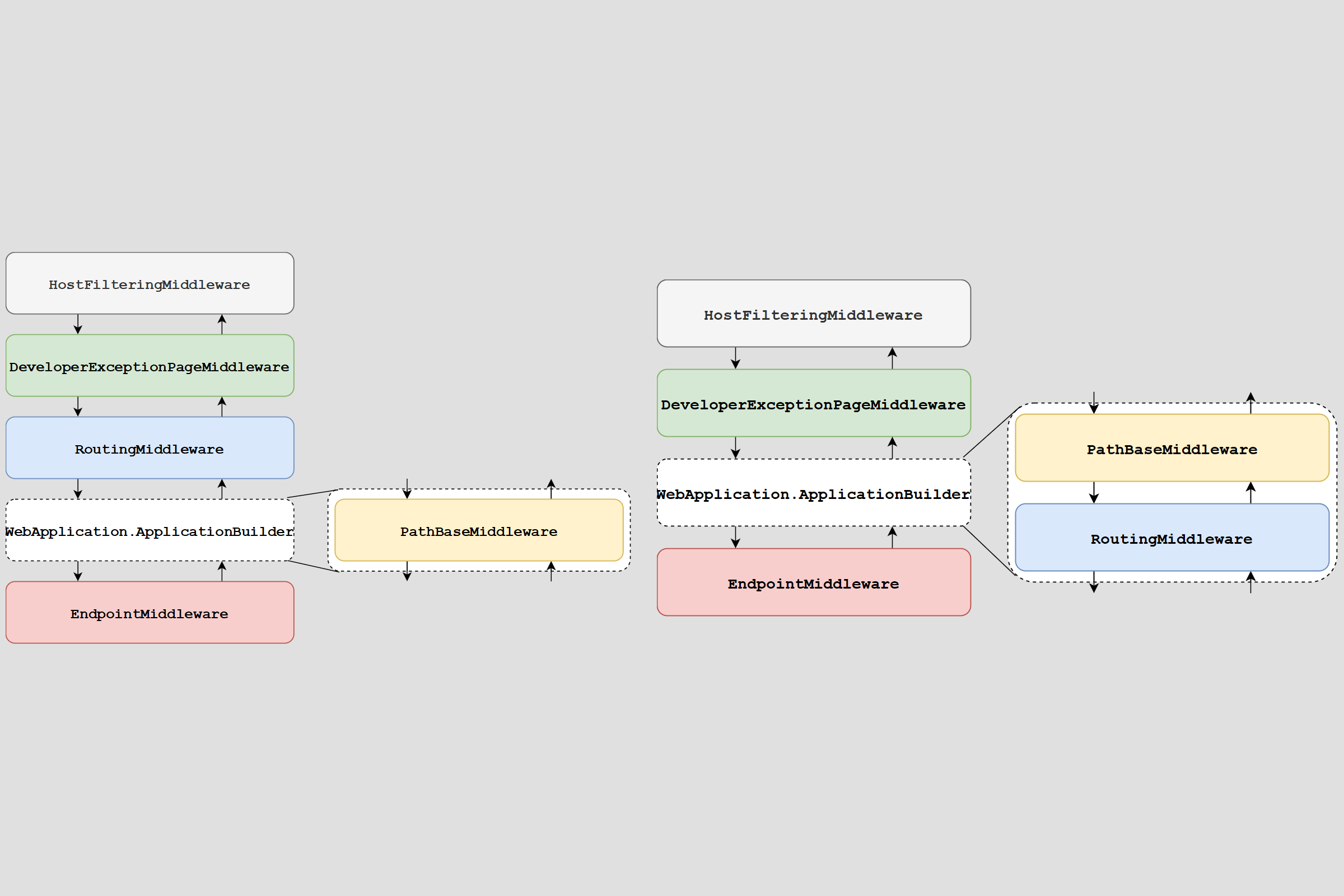