In my previous post I compared the new WebApplication to the Generic Host. In this post I look at the code behind WebApplicationBuilder, to see how it achieves the cleaner, minimal, hosting API, while still providing the same functionality as the generic host.

.NET 6 introduced a completely new way to "bootstrap" an ASP.NET Core application. Instead of the traditional split between Program.cs and Startup, the entire bootstrapping code goes in Program.cs, and is far more procedural than the raft of lambda methods required by the Generic Host in previous versions:

The first step in our example program is to create an instance of WebApplicationBuilder using the static method on WebApplication:

This instantiates a new instance of WebApplicationOptions assigns the Args arguments from the command line arguments, and passes the options object to the WebApplicationBuilder constructor (shown shortly):

As an aside, target-typed new when the target type is not obvious sucks for discoverability. There's no way to even guess what the second new() is creating in the code above. A lot of this is the same arguments for not always using var, but I found it particularly irritating in this case.

WebApplicationOptions provides an easy way to programmatically override some important properties; if these aren't set, they'll be inferred by default as in previous versions.

The WebApplicationBuilder constructor is where the bulk of the sleight of hand takes place to make the minimal hosting concept work:

I haven't shown the body of the method yet, as there's a lot going on in this constructor, and lots of helper types, to achieve it. We'll come back to those in a second, for now we'll focus on the public API of WebApplicationBuilder.

The public API of WebApplicationBuilder

The public API of WebApplicationBuilder consists of a bunch of read only properties, and a single method, Build(), which creates a WebApplication.

If you're familiar with ASP.NET Core, many of these properties use common types from previous versions:

The WebHost and Host properties are interesting, in that they expose new types, ConfigureWebHostBuilder and ConfigureHostBuilder. These types implement IWebHostBuilder and IHostBuilder respectively, and are primarily exposed as a way for you to use pre-.NET 6 extension methods with the new type. For example, in the previous post, I showed how you could register, Serilog's ASP.NET Core integration by calling UseSerilog() on the Host property:

We'll start by looking at the public ConfigureHostBuilder and ConfigureWebHostBuilder.

ConfigureHostBuilder implements IHostBuilder, and it looks like it implements ISupportsConfigureWebHost, but a look at the implementation shows that's a lie:

That means that although the following code compiles:

It's never great to see these runtime exceptions, but it helps to think of the ConfigureHostBuilder as an "adapter" for existing extension methods (like the UseSerilog() method) rather than a "real" host builder. This becomes apparent when you see how methods such as ConfigureServices() or ConfigureAppConfiguration() are implemented on these types:

The ConfigureServices() method, for example, immediately executes the supplied Action<> using the injected IServiceCollection from the WebApplicationBuilder. So the following two calls are functionally identical:

The latter approach is clearly not worth using in normal practice, but existing code that relies on this method (extension methods, for example) can still be used.

Not all of the delegates passed to methods in ConfigureHostBuilder run immediately. Some, such as UseServiceProviderFactory() are saved in a list, and are executed later in the call to WebApplicationBuilder.Build()

I think that covers the ConfigureHostBuilder type, and ConfigureWebHostBuilder is very similar, acting as an adapter from the previous API to the new imperative style. Now we can get back to the WebApplicationBuilder constructor.

Before we took a diversion to look at ConfigureHostBuilder, we were about to look at the WebApplicationBuilder constructor. But we're still not ready for it yet… first we need to look at one more helper class, BootstrapHostBuilder.

BootstrapHostBuilder is an internal IHostBuilder implementation used by the WebApplicationBuilder. It's mostly a relatively simple implementation, which "remembers" all of the IHostBuilder calls it receives. For example, the ConfigureHostConfiguration() and ConfigureServices() functions look like the following:

Most of the complexity of BootstrapHostBuilder is in its RunDefaultCallbacks(ConfigurationManager, HostBuilder) method. This is used to apply the stored delegates in the correct order as we'll see later.

Finally, we come to the WebApplicationBuilder constructor. This contains a lot of code, so I'm going to walk through it piece by piece.

Note that I've taken a couple of liberties to remove tangential bits of code (e.g. guard clauses and testing code)

WebApplicationBuilder acts like an "adapter" for the generic host, _hostBuilder, providing the imperative API that I explored in my previous post while maintaining the same functionality as the generic host.

The next steps in the constructor are well documented, thankfully:

After creating an instance of the BootstrapHostBuilder, the first method call is to HostingBuilderExtension.ConfigureDefaults(). This is exactly the same method called by the generic host when you call Host.CreateDefaultBuilder().

The next method call is to GenericHostBuilderExtensions.ConfigureWebHostDefaults(), which is the same extension method we would normally call when using the generic host in ASP.NET Core 3.x/5.

This method effectively adds an IWebHostBuilder "adapter" over the top of the BootstrapHostBuilder, calls WebHost.ConfigureWebDefaults() on it, and then immediately runs the lambda method passed in. This registers the WebApplicationBuillder.ConfigureApplication() method to be called later, which sets up a whole bunch of middleware. We'll come back to that method in the next post.

With the web host configured, the next method applies the args to the host configuration, ensuring they correctly override the defaults set by the previous extension methods:

Finally, the BootstrapHostBuilder.RunDefaultCallbacks() method is called, which runs all the stored callbacks we've accumulated so far in the correct order, to build the HostBuilderContext. The HostBuilderContext is then used to finally set the remaining properties on the WebApplicationBuilder.

That's the end of the constructor. At this point the application is configured with all of the "hosting" defaults—configuration, logging, DI services, and environment etc.

Now you can add all your own services, extra configuration, or logging to the WebApplicationBuilder:

Once you've finished with the app specific configuration, you call Build() to create a WebApplication instance. In the final section of this post, we look inside the Build() method.

The Build() method isn't very long, but it's a little hard to follow, so I'll walk through it line by line:

The first thing we do is copy the configuration sources configured in the ConfigurationManager into the _hostBuilder's ConfigurationBuilder implementation. When this method is called, builder is initially empty, so this populates all the sources that were added both by the default builder extension methods, and extra sources you configured subsequently.

Note that technically the ConfigureHostConfiguration method doesn't run straight away. Rather, we are registering a callback that will be invoked when we call _hostBuilder.Build() shortly.

In the next line we run any callbacks we have collected in the ConfigureHostBuilder property, as I discussed earlier..

If there are any, these include callbacks like ConfigureContainer() and UseServiceProviderFactory(), which are generally only used if you're using a third-party DI container. 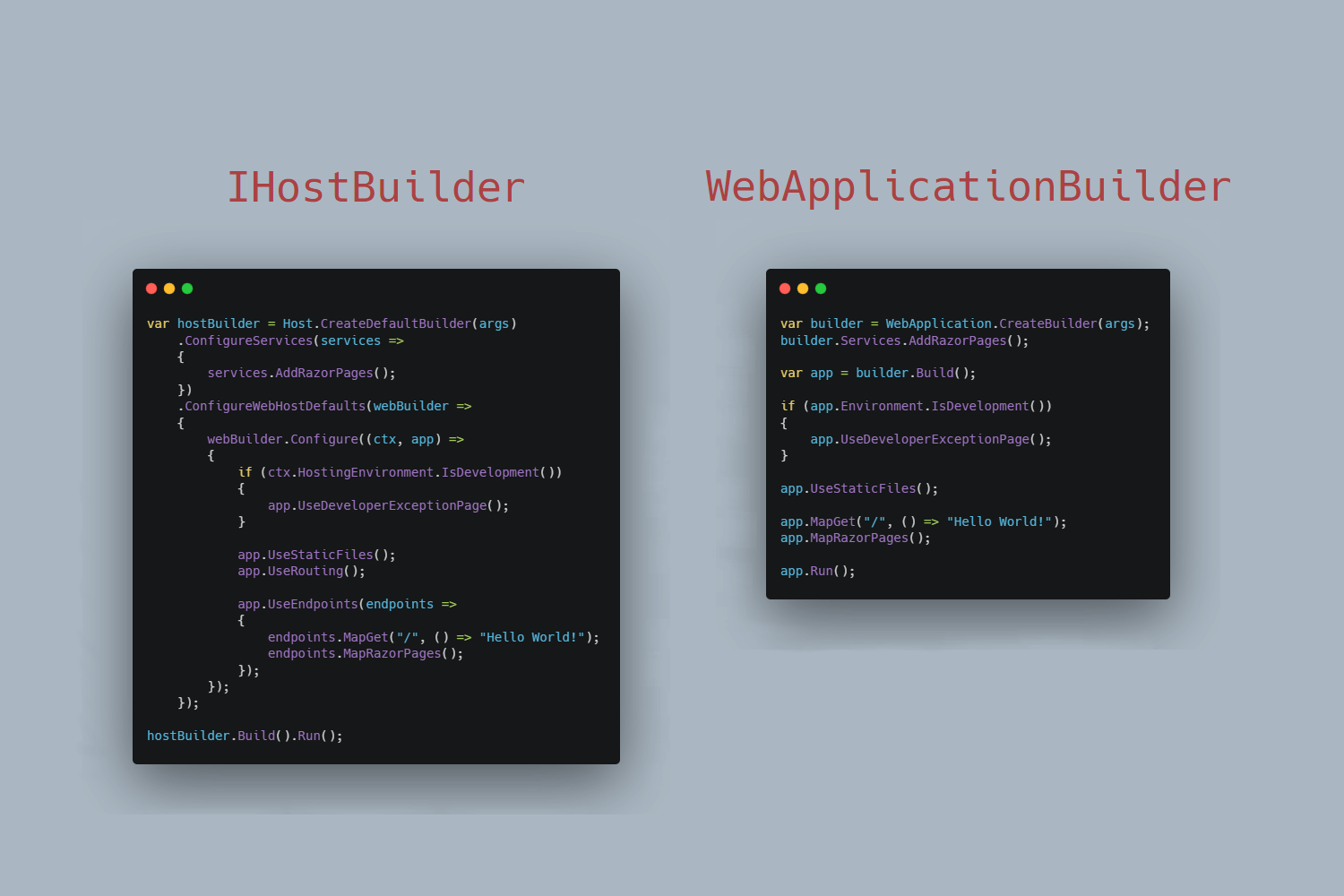 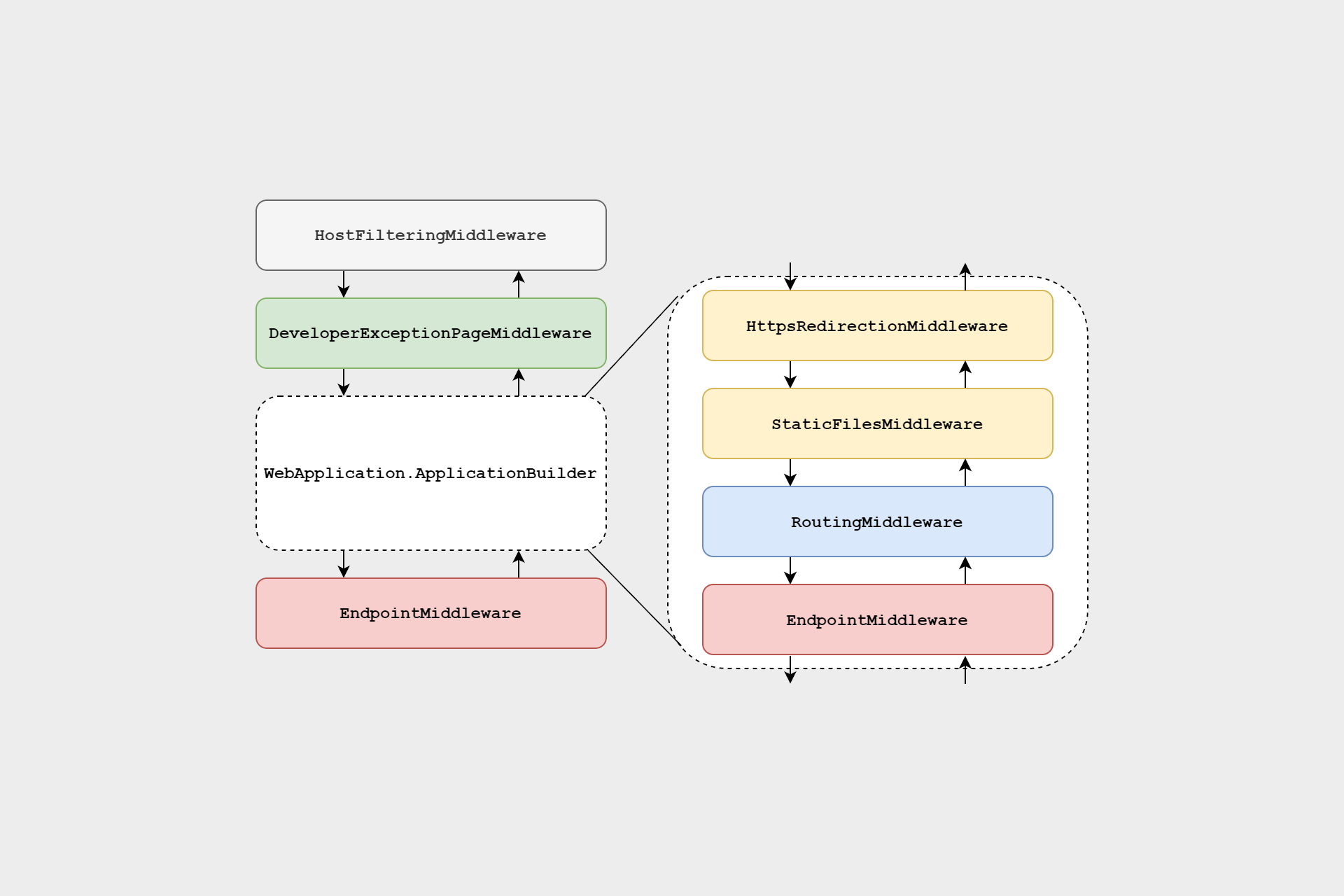 Next Building a middleware pipeline with WebApplication: Exploring .NET 6 - Part 4