Inserting and removing characters
A deep dive on StringBuilder - Part 4

So far in this series we've covered creating a StringBuilder, appending values to it, and retrieving the final string. In this post, we look at some of the trickier manipulations you can do with StringBuilder: inserting and removing characters.

We'll start by looking at how we can remove characters from a StringBuilder, which is a surprisingly difficult task. Later we move on to inserting characters, which can involve inserting additional chunks, or moving characters around in an existing chunk.

Removing characters from a StringBuilder

The simplest Remove() overload provides a startIndex, and a number of characters to remove. Once you remove the precondition checks, you're left with the following:

This method first checks to see if you're trying to remove all the characters in the StringBuilder. If it is, then we set the property Length to 0. But don't be fooled, this isn't a simple auto-property we're updating. The setter for Length is a complicated method that has to do a lot of work! Rather than dig into it here, we'll assume that we don't want to remove all of the characters in the string, and continue with the remainder of the method. If you're interested, then you can see the implementation here; word of warning, it's involved!

Assuming length>0 then we call the other overload of Remove(). This is a private function which returns the chunk which contains the startIndex after the required number of characters have been removed. We don't need the out variables in this case, so they're discarded. There's quite a lot to this method, so I give the whole thing below, and will reproduce parts of it below as we discuss

The first part of the method is about working out which of the StringBuilder chunks in the list are affected by the Remove().

We start by calculating the endIndex we're looking for, and set the first chunk to this.

Remember, the StringBuilder pointed to by this contains the final chars in the string, while referenced chunks point to chars nearer the start of the string, as shown below.

m_ChunkOffset is the number of characters in previous chunks, so we first check if the endIndex is greater than m_ChunkOffset. If it isn't, then we know that the chars to remove are in "earlier" chunks, so we decrement this chunk's m_ChunkOffset, and move onto the next chunk.

If the current chunk does incorporate the endIndex then we set endChunk if it's not already set. We then check to see if this chunk also includes the startIndex. If it does, we set indexInChunk and exit the while loop. If it doesn't, we will keep moving along chunks until we find the one that does.

Once this block has finished, the following values have been set:

Let's move on to the second part of the method.

In this second section, we look at the chunk that contains the start index, indexInChunk, as long as it's different to the end index. If that's the case we "delete" everything after the start index, by simply setting the m_ChunkLength appropriately. As this field says how many characters are used, we don't actually have to erase any of the buffer.

Next, we remove any chunks between the start chunk and endChunk by setting the endChunk.m_ChunkPrevious to point directly to chunk. Any chunks that were previously between chunk and endChunk will now be unreferenced. We then update endChunk.mChunkOffset as appropriate. As a final step in the conditional, if indexInChunk==0, then we can remove chunk from the linked list entirely!

Phew, that was quite a complicated one, with lots of indexes moving around. The final result aims to copy as few bytes around as possible - in general it's only the end chunk that will need to copy bytes, and even then we do our best to avoid copying more than necessary.

We've now successfully removed some characters from a StringBuilder, but what if we want to do the reverse? In the next section, I look at the Insert(string) method.

There are a whole range of Insert() methods on StringBuilder, much as there is for Append(). However, it's worth being aware that while the Append() functions optimise appending built-in types using ISpanFormattable (as I discussed in a previous post), the Insert() methods aren't optimised. They currently call ToString() on the provided value, resulting in an additional allocation, for example:

In this section I'll look at Insert(string) and its dependencies. The first method is similar to the Append equivalent, in that it enters an unsafe context and obtains a fixed pointer to the first character in the string to add. It then passes this into a private, unsafe overload of Insert.

This private overload calls two methods: MakeRoom, which creates an empty "gap" at the logical index; and ReplaceInPlaceAtChunk which fills in the gap with the original string value.

MakeRoom does one of three things:

The MakeRoom function is, again, pretty well commented, so I've just enhanced the code below with some extra comments.

MakeRoom is where the bulk of the complexity is in Replace(), but we still need to copy the characters in. Thanks to the design of MakeRoom we already have a reference to the chunk and the index in that chunk where we need to write the value. The only complexity is that we don't necessarily have space in a single chunk, so we may need to write some characters to the next chunk.

ReplaceInPlaceAtChunk uses the Next(chunk) method to get the next chunk in the linked list towards the head. This is harder than it seems, as StringBuilder only maintains a reference to the previous chunk i.e. it's a singly linked list. If you remember back to the first post in this series, the head of the list contains the final chars of the string, and refers to earlier chunks. We want to go from a later chunk, and move to the left on the following diagram.

To get the Next chunk we have to start at the head and walk backwards!

FindChunkForIndex starts from the head of the linked list (this), and walks backwards until it finds a chunk with an m_ChunkOffset greater than the combined offset and length of the original chunk. As soon as it finds this chunk, it returns it (and ReplaceInPlaceAtChunk can fill it in).

That brings us to the end of this post, and to the end of my in-depth look at StringBuilder. There are still more methods and properties I could look into, but I think I've covered a good selection already, and demonstrated some interesting logic and challenges involved in working with the data structure. In the next post I look at a different class entirely, StringBuilderCache.

In this post I described how the Remove() and Insert() methods of StringBuilder() work. These methods often involve manipulating StringBuilder chunks in the middle of the linked list, which presents some interesting challenges. The Remove() method has to ensure 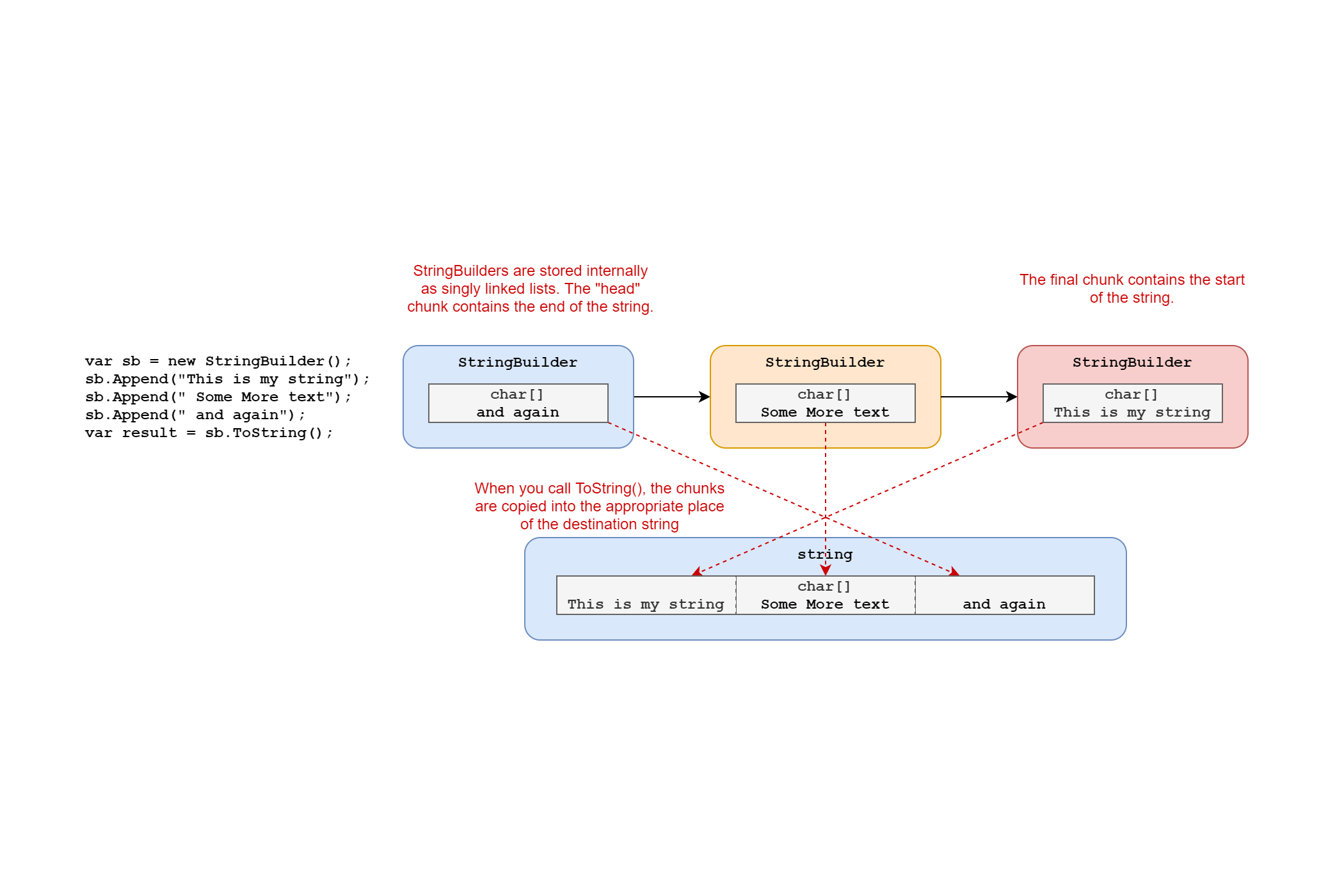 Previous Converting chunks to a string with ToString(): A deep dive on StringBuilder - Part 3 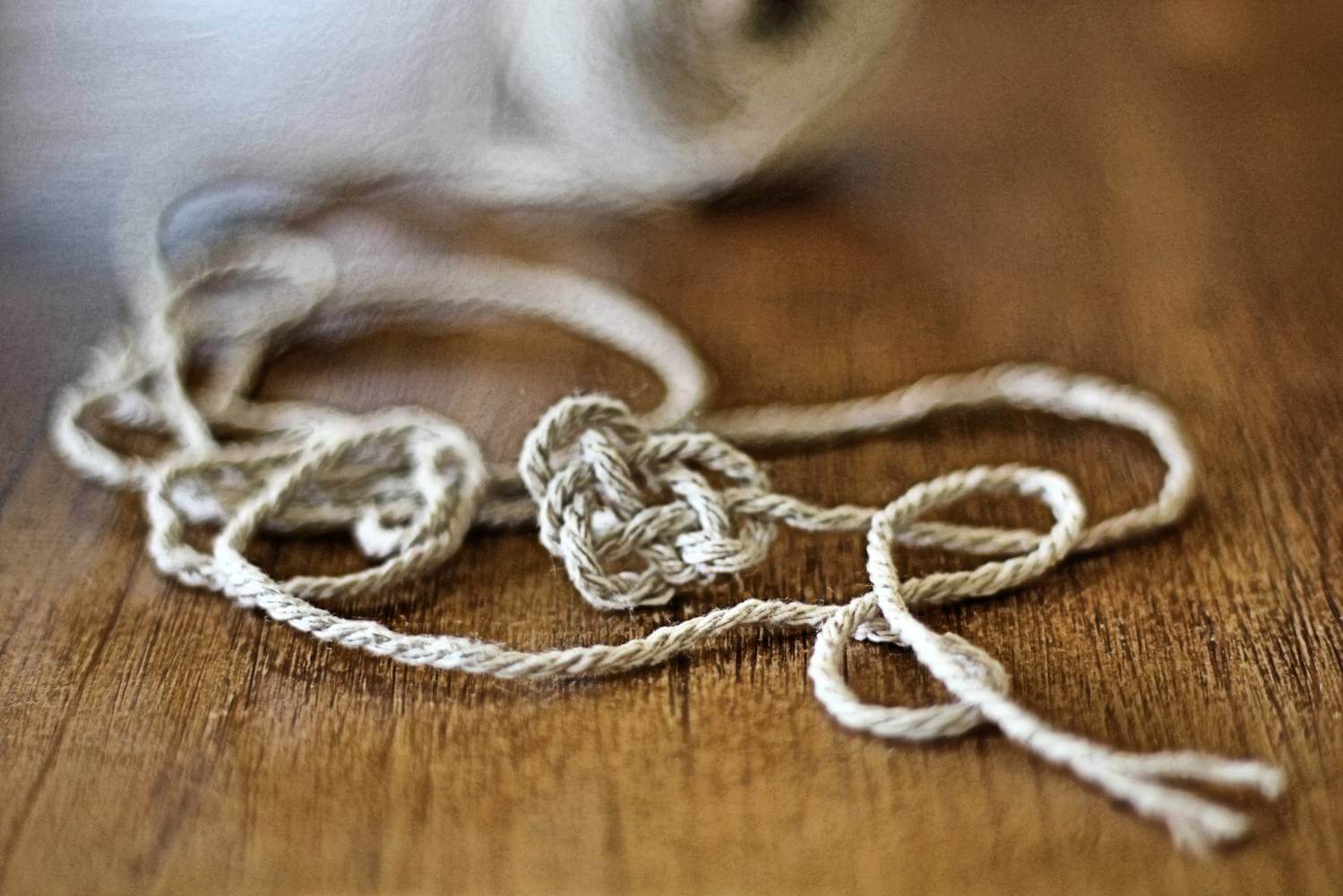