In the previous post I described several ways to run database migrations when deploying to Kubernetes. In this post, I show to implement my preferred approach using Kubernetes Jobs and init containers. I'll show an example Helm Chart for a job, and how to update your existing application pods to use init containers that wait for the job to complete.

A quick recap: the database migration solution with Jobs and init containers

The approach I described consists of three parts:

With these three components, the overall deployment process looks like the following:

For the remainder of the post I'll describe how to update your application's Helm Charts to implement this in practice.

For this post I'll extend a sample application I described in a previous post. I described creating a helm chart containing two sub-applications, an "API app", with a public HTTP API and associated ingress, and a "service app" which did not have an ingress, and would be responsible, for example, for handling messages from a message bus.

These sub charts are nested under the top-level test-app, giving a folder structure something like the following: 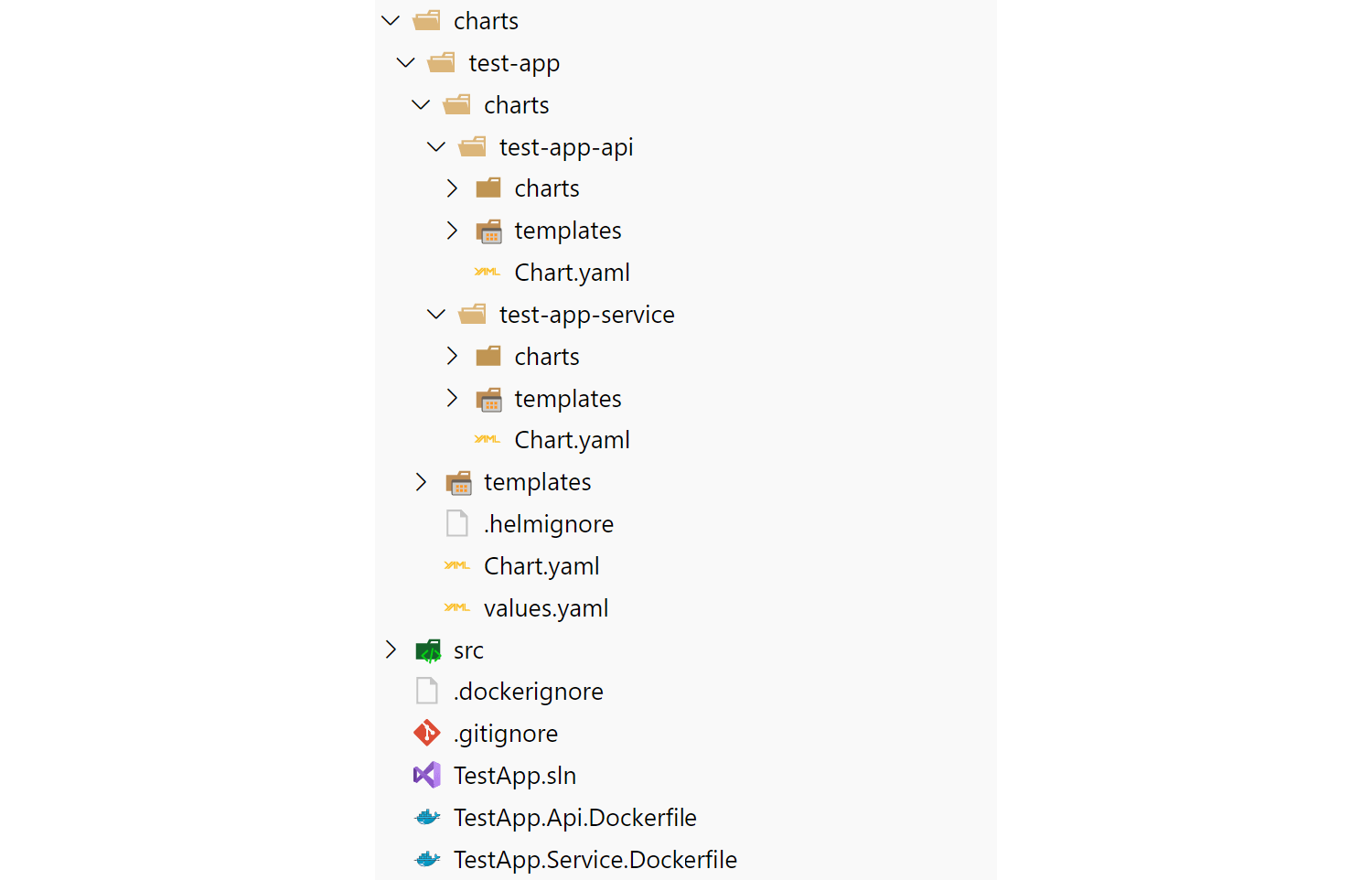 In this post we assume we now need to run database migrations when this chart is installed or updated.

The first component is the separate .NET project that executes database migrations. There are lots of tools you can use to implement the migrations. For example:

Just so we have something to test, I created a new console application using dotnet new console and updated the Program.cs to sleep for 30s before returning successfully:

This will serve as our "migration" tool. We'll build it into a Docker container, and use it to create a Kubernetes Job that is deployed with the application charts.

The example below is the full YAML for the Kubernetes Job, including support for injecting environment variables as described in a previous post. I'll discuss the YAML in more detail below

This section is standard for all Kubernetes manifests. It specifies that we're using version 1 of the Job manifest, and we use some of Helm's helper functions to create appropriate labels and names for the created resource.

One point of interest here - we create a unique name for the job by appending the revision number. This ensures that a new migration job is created on every install/upgrade of the chart.

This property is specific to the Job manifest, and indicates the number of times a job should be retried if it fails. In this example, I've set .spec.backoffLimit=1, which means we'll retry once if the migrations fail. If the migrations fail on the second attempt, the Job will fail completely. In that case, as the job will never complete, the new version of the application code will never run.

This is the main pod manifest for the job. It defines which containers will run as part of the job and their configuration. This section is very similar to what you will see in a typical deployment manifest, as both manifests are about defining the containers that run in a pod.

The main difference in this example, is that I've overridden the command and args properties. This combination of command and args is equivalent to running dotnet TestApp.Cli.dll migrate-database when the container starts.

That's all there is to the job manifest. Create the manifest as the only template in the test-app-cli sub-chart of the top-level test-app: 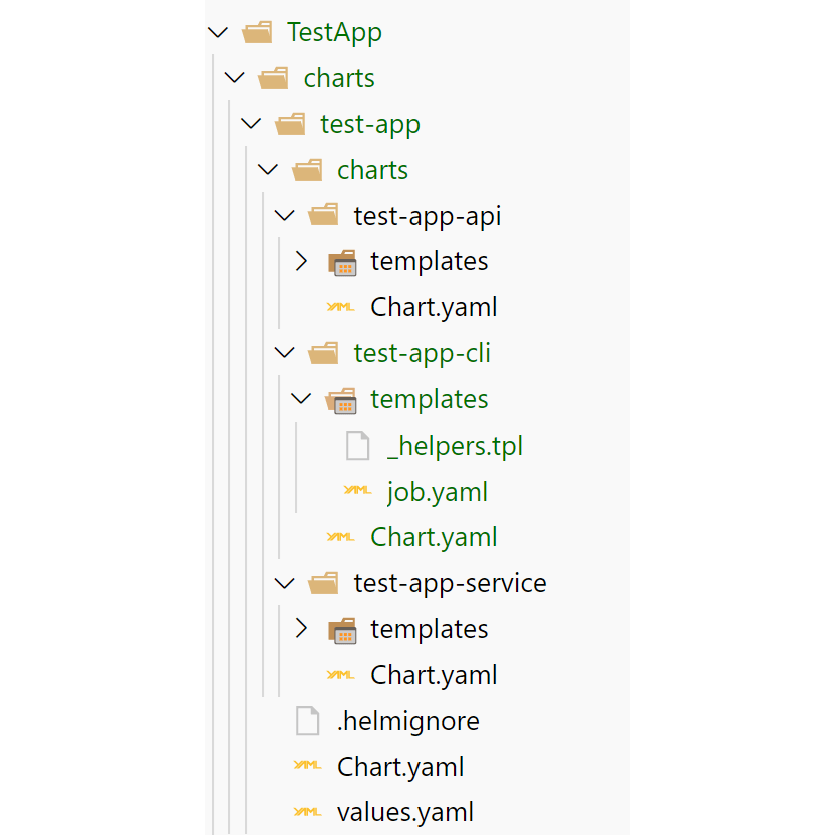 One final thing is to add some configuration to the top-level values.yaml file, to configure the migration app:

I've added some default values for the container. You could add extra default configuration if required, for example standard environment variables, as I showed in a previous post.

At this point, we could test installing our application, to make sure the job executes correctly.

Assuming you have helm installed and configured to point to a cluster, and that you have built and tagged your containers as version 0.1.1, you can install the top-level chart by running:

If you check the Kubernetes dashboard after running this command, you'll see a new Job has been created, called my-test-app-release-test-app-cli:

The 1/1 in the Pods column indicates that the Job is executing an instance of your CLI pod. If you check in the Pods section, you'll see that the app, CLI, and service pods are running. In the example below, the API pod is still in the process of starting up:

Note that we haven't implemented the init containers yet, so our application pods will immediately start handling requests without waiting for the job to finish. We'll address this shortly.

After 30 seconds, our Thread.Sleep() completes, and the "migration" pod exits. At this point the Job is complete. If you view the Job in the Kubernetes dashboard you'll see that the Pod shows a status of Terminated: Completed with a green tick, and that we have reached the required numbers of "completions" for the Job (for details on more advanced job requirements, see the documentation). 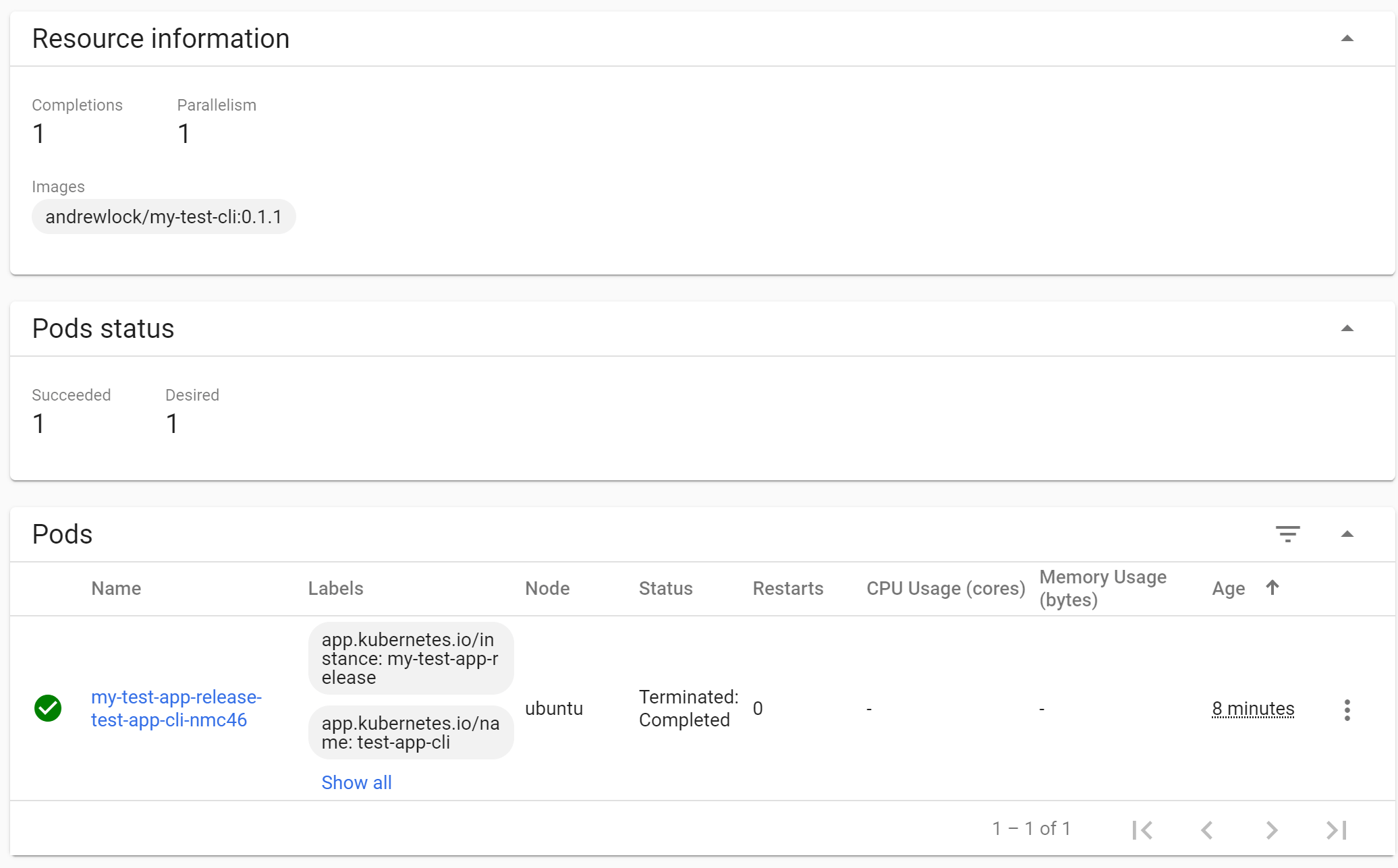 We're now running migrations as part of our deployment, but we need to make sure the migrations complete before the new application containers start running. To achieve that, we'll use init containers.

A Kubernetes pod is the smallest unit of deployment in Kubernetes. A pod can contain multiple containers, but it typically only has a single "main" container. All of the containers in a pod will be scheduled to run together, and they'll all be removed together if the main container dies.

In this section I'll show how to implement an init container that waits for a specific job to complete. The good news is there's very little to write, thanks to a little open-source project k8s-wait-for. The sole purpose of this project is exactly what we describe: to wait for pods or jobs to complete and then exit.

We can use a Docker container containing the k8s-wait-for script, and include it as an init container in all our application deployments. With a small amount of configuration, we get the behaviour we need.

For example, the manifest snippet below is for the test-app-api's deployment.yaml. I haven't shown the whole file for brevity—the important point is the initContainers section:

The initContainers section is the interesting part. We provide a name for the container (I've used the name of the sub-chart with an -init suffix, e.g. test-app-api-init), and specify that we should run the Docker image groundnuty/k8s-wait-for:1.3, using the specified imagePullPolicy from configuration.

We specify what the init container should wait for in the args dictionary. In this case we choose to wait for a job with the name "{{ .Release.Name }}-test-app-cli-{{ .Release.Revision}}". Once Helm expands that template, it will look something like my-test-app-release-test-app-cli-6, with the final Revision number incrementing with each chart update. That matches the name: we gave to the job that is deployed in this release.

And that's it. Add the initContainers section to all your "main" application deployments (two in this case: the API app and the message handler service). Next time you install a chart, you'll see the behaviour we've been chasing. The new application deployments are created at the same time as the job, but they don't actually start. Instead, they sit in the PodInitializing status:

In practice, it's often unnecessary to have zero-downtime deployments for message-handling services, and it increases the chance of data inconsistencies. Instead, we typically use a "Recreate" strategy instead of Rolling Update for our message-handling apps (but use a rolling update for our APIs to avoid downtime).

Once the job completes, the init containers will exit, and the new application pods can start up. Once their startup, readiness, and liveness probes indicate they are healthy, Kubernetes will start sending them traffic, and will scale down the old application deployments. 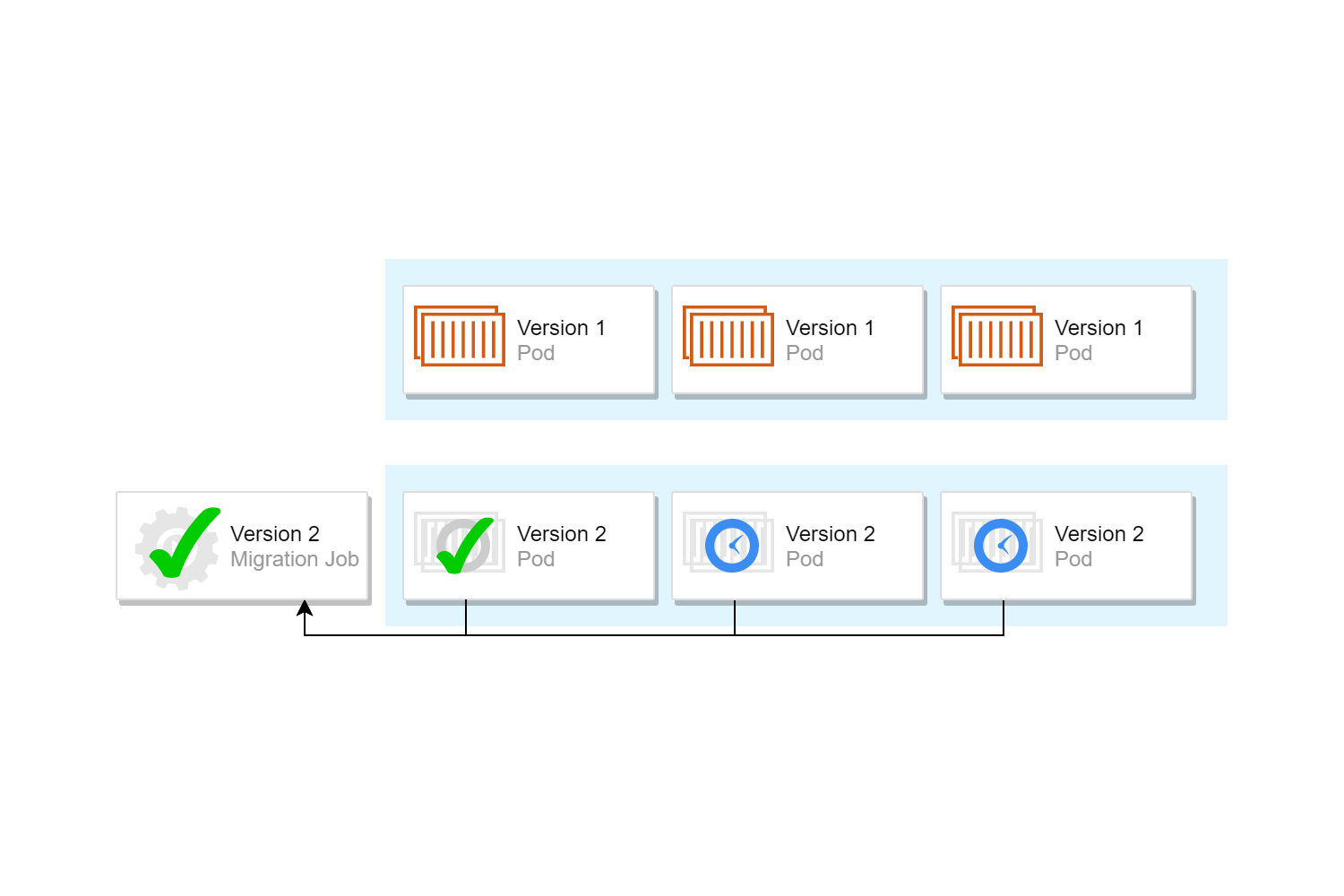